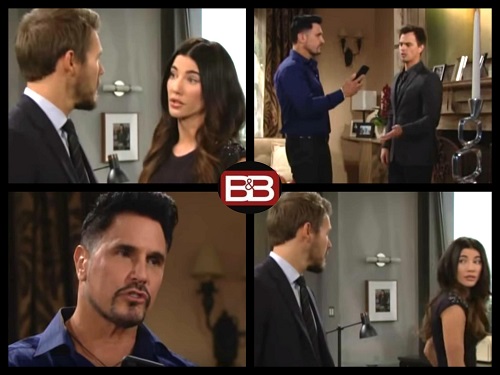 The Bold and the Beautiful (B&B) spoilers for Thursday, September 28, tease that Wyatt (Darin Brooks) will seek answers from Liam (Scott Clifton). He’ll want to know why his brother would resort to blackmail. Wyatt will point out that it’s not a good idea to make an enemy out of Bill (Don Diamont). Besides, they’re a family. Wyatt just won’t think this is the best way to handle the situation.

While Bill’s on speakerphone, Wyatt will join his argument with Liam. He’ll insist that Bill’s sorry for his actions and truly wants to find common ground. Wyatt will suggest that everyone makes mistakes, but Liam will think Bill’s errors were particularly atrocious. He won’t be willing to forgive and forget.

Naturally, Steffy (Jacqueline MacInnes Wood) will support Bill and Wyatt’s view. She’ll maintain that it’s time to end this vicious conflict. Steffy will remind Liam of the hostility that emerged within the Forrester clan. When Steffy and the others bailed on Eric’s (John McCook) wedding, it was almost the end of the Forresters.

Fortunately, the family managed to repair the damage and now that’s what Steffy wants for the Spencers. She understands that Liam can achieve great things at Spencer Publications, but she won’t think his success will matter without his dad in his life. Now that Wyatt’s involved, Liam could lose his brother as well.

B&B fans know Liam won’t budge on this, but that won’t stop Bill from trying. He’s most concerned about the confession Liam recorded. The Bold and the Beautiful spoilers state that being nice will get Bill nowhere. He’ll eventually revert to his usual strategy of aggressive demands.

Bill will shout that Liam should erase that recording so they can start putting their family back together. He’ll be desperate to get rid of the dirt Liam has on him. Of course, Liam may argue that the recording shouldn’t be an issue. If Bill is really interested in making amends, deleting a message shouldn’t be a condition.