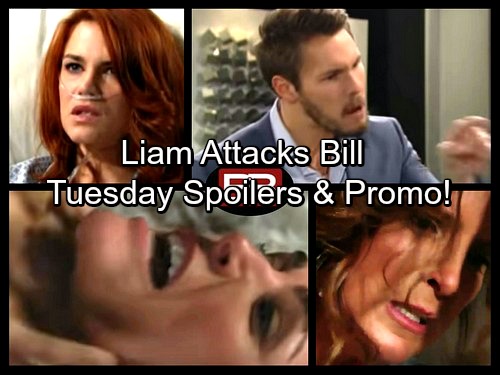 The Bold and the Beautiful (B&B) spoilers for Tuesday, August 29, tease that Sheila (Kimberlin Brown) will nearly murder Quinn (Rena Sofer) in a fit of rage. She’ll be tempted to choke Quinn to death, but that obviously isn’t something Eric (John McCook) would approve of. Sheila will eventually let Quinn go, but it’ll probably be because she’s forced to.

B&B spoilers state that Eric will barge in on a mission. He’ll insist that all of this clashing needs to stop. Quinn and Sheila just can’t control their anger when they’re around each other. If they can’t put an end to these fierce faceoffs, one of them could end up dead. Eric will do his best to halt the drama, but you can bet that Sheila and Quinn will continue to seethe.

It appears Eric will basically declare Sheila the winner of this battle. Even if Sheila has to leave, Eric will take pity on her. He’ll still be duped by Sheila’s victim act, but Quinn will do whatever she can to change his mind. On Wednesday, Ridge (Thorsten Kaye) will get involved. He’ll note that Quinn is right about crazy Sheila and the disasters that come with her presence.

While we wait for Quinn and Sheila’s next big blowup, we can watch brokenhearted Sally (Courtney Hope). She’ll be stuck in a hospital bed on Tuesday’s episode. Sally will feel like the fire was the worst thing that could’ve happened. It seems she’ll be ready to throw in the towel, but Shirley (Patrika Darbo) may want to press on. She might suggest that Spectras never give up.

The Spectra team will indeed ask Thomas (Pierson Fode) to rescue them later this week. Will he be willing to pitch in once again? It’s going to take a lot of work to rebuild, but Sally can’t bear the thought of ending her career like this.

Other Bold and the Beautiful spoilers say Liam (Scott Clifton) will confront Bill (Don Diamont) about his actions. Despite Bill’s claims, Liam will shout that the Spectra fire wasn’t an accident. He’ll argue that Bill is to blame, not the faulty wiring.

Bill will believe he did the world a favor by getting rid of Spectra scum, but Liam will think his father truly crossed the line. He’ll rant about Bill’s ruthlessness as he worries about Sally’s future. We’ll give you updates as other Bold and the Beautiful news comes in. Stay tuned to B&B and don’t forget to check CDL often for the latest Bold and the Beautiful spoilers, updates and news.