BY Heather Hughes on December 25, 2017 | Comments: one comment
Related : Soap Opera, Spoiler, Television, The Bold and the Beautiful 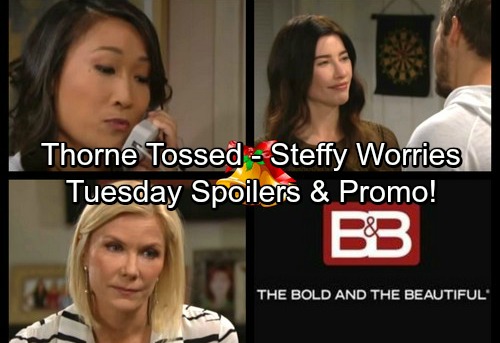 The Bold and the Beautiful (B&B) spoilers for Tuesday, December 26, tease that Steffy (Jacqueline MacInnes Wood) will grow impatient over the paternity test results. She needs to know who the father is so she can finally relax and get on with her life. At least that’s what she hopes she’ll be able to do!

Fortunately, the doctor will assure Steffy that it won’t be long until she learns the truth. Over the phone, the doc will suggest that Steffy should have the results later that night. Steffy will try to put her doubts aside for now. She’ll do her best to convince herself that this child is going to be Liam’s (Scott Clifton). 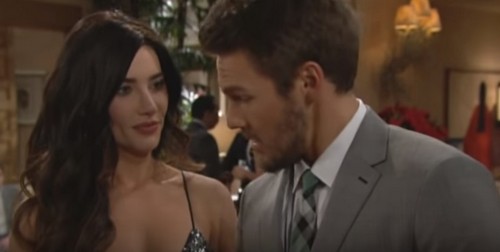 The Bold and the Beautiful spoilers say Steffy and Liam will discuss their little one in Tuesday’s episode. They’ll talk about their plans for the future and mull over what their kid will be like. Steffy will hope he or she turns out just like Liam. She’ll insist that he’s going to be a great dad and she’ll pray that’s true.

Later this week, Steffy will get the news she’s been waiting for. The paternity test results will show Liam is the father, but a huge twist could be brewing. Plus, B&B will have to deal with the issue of Steffy and Bill’s (Don Diamont) betrayal. They’ll definitely pay the price when their hookup is eventually exposed. Viewers can expect some serious drama!

In the meantime, Brooke (Katherine Kelly Lang) and Thorne (Ingo Rademacher) will bicker about Ridge (Thorsten Kaye). She’ll determine that it’s not wise for Thorne to keep living in her home. If he can’t get on board with her engagement, then he needs to leave. Besides, this arrangement isn’t really appropriate now that Brooke is making a real commitment to Ridge.

Thorne won’t like the idea of moving out, but he’ll respect Brooke’s wishes. However, he won’t be able to respect her decision to marry a cheater who hurts her. Thorne doesn’t believe Ridge is worthy of Brooke’s love. His desperate plea to stop this marriage will fall on deaf ears.