BY Kinsley Goldman on November 27, 2017 | Comments: one comment
Related : Soap Opera, Spoiler, Television, The Bold and the Beautiful 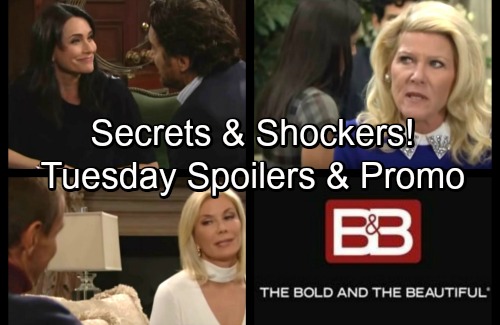 The Bold and the Beautiful (B&B) spoilers for Tuesday, November 28, tease that Brooke (Katherine Kelly Lang) and Thorne (Ingo Rademacher) will take a moment to catch up. He’ll ask for the truth about her relationship with Ridge (Thorsten Kaye). Thorne will note that they weren’t exactly on the same page when he arrived at the mansion.

Brooke will confess that things are complicated. She’ll suggest that Ridge can be a little rough around the edges, but that’s what makes him irresistible. Thorne will disagree and promote himself as the most desirable Forrester. He’ll admit that Brooke is one of the reasons he returned to Los Angeles. Thorne will mention that Brooke always looked out for him and now he wants to do the same for her. 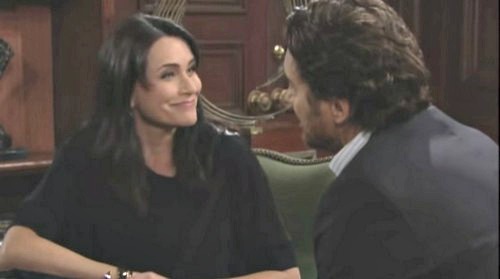 The Bold and the Beautiful spoilers say Thorne will push Brooke for the rest of the story. He’ll want to know why her engagement to Ridge fell apart. Once Brooke reveals that Ridge and Quinn (Rena Sofer) were caught kissing, Thorne will hit the roof. He’ll be appalled by what Ridge was willing to put Brooke and Eric (John McCook) through.

After Thorne hears about Brooke’s latest troubles, he’ll be furious with Bill (Don Diamont) as well. Thorne will decide he needs to be Brooke’s rock right now. He’ll become quite protective of her in the coming weeks. It’s clear that Thorne is hoping for a renewed romance, but it may take some time to win Brooke over.

Other B&B spoilers say Pam (Alley Mills) will get a shock at Il Giardino. When she spots Sheila (Kimberlin Brown) at work, Pam will grow a bit fearful. She’ll wonder if Eric knows Sheila stayed in town. Sheila was told to leave LA, but she just couldn’t do it. She still has a few tricks up her sleeve and Pam could easily become her next pawn.

Meanwhile, Quinn will be pleased about the Sheila-free holiday. She’ll talk to Ridge about it as she finally begins to drop her guard. However, The Bold and the Beautiful spoilers hint that plenty more Sheila drama is coming up. We’ll give you updates as other B&B news emerges. Stick with the CBS soap and don’t forget to check CDL often for the latest Bold and the Beautiful spoilers, updates and news.