The Bold and the Beautiful Spoilers: Tuesday, October 31 – Sally Gets a Scary Gift – Steffy Protects Liam From Flirty Sally 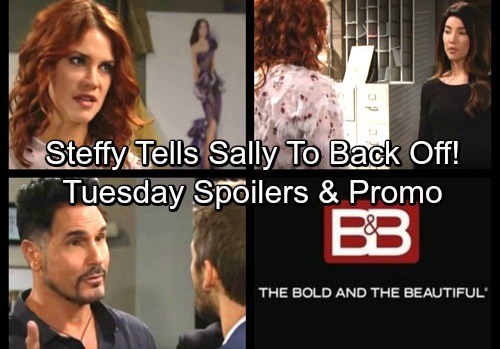 The Bold and the Beautiful (B&B) spoilers for Tuesday, October 31, tease that Liam (Scott Clifton) will make a last-ditch effort to save Spectra. He tried standing his ground with Bill (Don Diamont), but that plan didn’t work out. Liam wouldn’t accept Bill’s proposal for a compromise, but he’ll eventually come up with one of his own.

It looks like Liam will mention other enticing locations for Bill’s skyscraper. He might even be willing to ditch some of the changes he’s made at Spencer Publications. Honoring the promise he made to Sally (Courtney Hope) will be all Liam cares about. He’ll just want to make sure Sally’s dreams remain intact.

Unfortunately, Bill won’t go along with any idea Liam proposes. He’ll insist that “Sky” is going to be built on the Spectra property and that’s that. Liam will maintain that he won’t let this happen. He’ll do his best to figure something out, but he won’t have high hopes. Liam knows how Bill can be when a lucrative business opportunity is placed in front of him. Nothing else ever seems to matter.

Other Bold and the Beautiful spoilers say Saul (Alex Wyse) and Darlita (Danube Hermosillo) will have an alarming gift for Sally. She’ll be taken aback when they offer a frightening costume. Of course, the real fright will come from a menacing Steffy (Jacqueline MacInnes Wood). She’ll show up for a fierce faceoff in Tuesday’s B&B episode.

Steffy will point out that Sally knew about Bill’s involvement with the fire and kept it to herself. She’ll try to determine what kind of game Sally’s playing. The Bold and the Beautiful spoilers say Sally will try to ease the tension. She’ll assure Steffy that she simply appreciates Liam’s kindness. Sally won’t think Steffy needs to turn this into something it’s not.

However, Steffy will undoubtedly notice when her rival gushes about Liam. Sally will contend that Liam is the most honest man she’s ever met. She’ll praise his dedication to doing the right thing and helping those in need. Steffy will likely suggest that she’ll be keeping an eye on Sally. She won’t want her enemy to think Liam is an easy target.

Sally may think she can keep her desires buried, but it won’t be long until they rise to the surface. We’ll give you updates as other B&B news comes in. Stay tuned to the CBS soap and don’t forget to check CDL often for the latest Bold and the Beautiful spoilers, updates and news.

Trick or treat! Take a behind-the-scenes look at the spooky titles to kick off the special Halloween episode, tomorrow on #BoldandBeautiful!