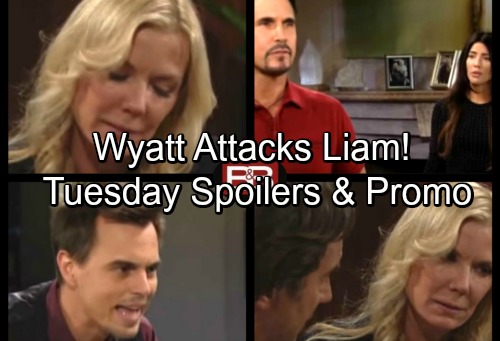 The Bold and the Beautiful (B&B) spoilers for Tuesday, September 19, tease that Wyatt (Darin Brooks) will confront Liam (Scott Clifton) about his new position at Spencer. He’ll have some questions about his brother’s sudden rise to the top. Wyatt will demand to know how Liam got Bill (Don Diamont) to agree to this.

Since Bill isn’t the kind of guy who would just give up the throne, Wyatt knows something must’ve happened. He’ll assume that Bill was forced into it somehow, but Liam won’t offer any details. He’ll simply insist that he’s in charge now and Wyatt will have to accept that. Liam might contend that Wyatt is welcome to work elsewhere if he doesn’t approve.

While Liam and Wyatt face off, B&B spoilers say Steffy (Jacqueline MacInnes Wood) will seek updates from Bill. She’ll sense that he’s upset, so she’ll ask what’s wrong. Bill will be reluctant to open up about his fight with Brooke (Katherine Kelly Lang). The whole thing was too ugly to even talk about.

Nevertheless, Steffy will keep at it. She’ll argue that if Bill wants her help, he needs to tell her what’s going on. The Bold and the Beautiful spoilers state that Bill will finally share some crushing news. He’ll admit that Brooke just walked on him. Bill will undoubtedly blame Liam for putting his marriage in jeopardy. He’ll feel like his son has taken all this too far and Steffy will back him up.

Unfortunately, Liam has no interest in making peace with his father. Will their conflict get worse before it gets better? It certainly looks that way. Bill was furious when Liam took control of the company, but losing his wife could truly push him to his limit. He could seek vengeance if Brooke can’t find it in her heart to forgive him.

Other Bold and the Beautiful spoilers say Brooke will fill Ridge (Thorsten Kaye) in on her latest confrontation. She’ll confess that Bill did something horrible and she’s not sure she can get past it. Brooke will think choosing the infamous “Dollar Bill” Spencer might’ve been a huge mistake.

Ridge will console Brooke as he mulls over his next move. He’ll definitely plan to take advantage of this lucky break. We’ll keep you posted other B&B details emerge. Stay tuned to the CBS soap and don’t forget to check CDL often for the latest Bold and the Beautiful spoilers, updates and news.