BY Kinsley Goldman on November 1, 2017 | Comments: one comment
Related : Soap Opera, Spoiler, Television, The Bold and the Beautiful 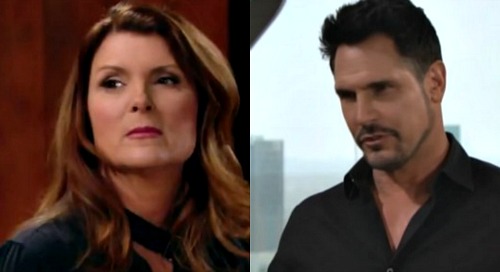 The Bold and the Beautiful (B&B) spoilers tease that Brooke (Katherine Kelly Lang) will turn her back on Bill (Don Diamont) after the latest fiasco with Liam (Scott Clifton) and Sally (Courtney Hope). She’ll realize Bill hasn’t changed and probably never will. Risky behavior is the norm for the sinister Spencer.

Bill is a dangerous man who will do anything to get what he wants. He knows how to turn on the charm and make people believe he’s on a better path, but he always resorts to ruthlessness in the end. Bill can also snap at a moment’s notice. He’s been known to have violent outbursts when things don’t go his way.

Doesn’t that description sound a lot like another B&B character? Any guesses on who’s the female equivalent of Bill? It’s the vicious Sheila Carter (Kimberlin Brown)! Since these Bold and the Beautiful baddies have so much in common, perhaps the show should put them together romantically. Bill and Sheila might be the perfect pair.

Brooke tried to be loyal, but she just couldn’t get past how cruel Bill can be. Someone like Sheila, on the other hand, could admire that quality. Bill’s got the hots for Steffy (Jacqueline MacInnes Wood) and that’s undoubtedly going to be part of his story soon. However, Bill and Steffy just don’t make sense as a long-term pairing. She’ll inevitably end up back with Liam sooner or later.

Where will that leave Bill? He’ll be single and ready to mingle. The Bold and the Beautiful spoilers state that some exciting corporate drama is coming up. Thorne (Ingo Rademacher) will make some daring moves that could easily anger Bill. He’s not a big fan of the Forrester clan, especially when they put his plots in jeopardy.

Meanwhile, Sheila will also be scheming. It’s what she does best! Maybe Sheila and Bill could reach a mutually beneficial agreement. They could work out some sort of deal that forces them to work together. Would feelings emerge out of that? It’s happening for Liam and Sally, so it could certainly happen for Sheila and Bill.

This might be a good way to set up a new B&B power couple. Bill is a fierce force on his own and so is Sheila, but they’d be downright unstoppable as a dynamic duo. Would you like to see the show explore this potential pairing? We’ll give you updates as other news comes in. Stick with the CBS soap and don’t forget to check CDL often for the latest Bold and the Beautiful spoilers, updates and news.