BY Heather Hughes on December 2, 2017 | Comments: one comment
Related : Soap Opera, Spoiler, Television, The Bold and the Beautiful 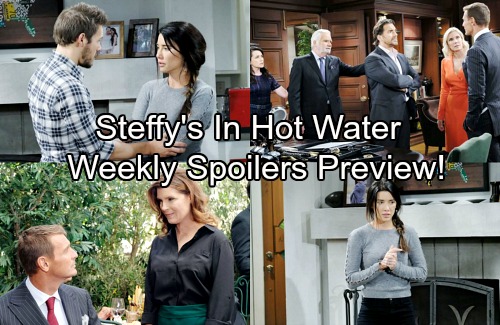 The Bold and the Beautiful (B&B) spoilers for the week of December 4-8 tease that some serious family drama is coming up. For starters, Steffy (Jacqueline MacInnes Wood) and Bill’s (Don Diamont) secret will nearly be exposed. Liam (Scott Clifton) will insist that Steffy needs to explain what’s bothering her. He just won’t understand why she’s been a big ball of nerves lately.

Steffy will pretty much be hysterical, but she’ll finally collect herself enough to give Liam an answer. Since she tipped Liam off about Bill’s involvement, she’ll have to provide an excuse that’s tied to him. Perhaps she’ll suggest that she feels guilty about pushing Liam to make amends with Bill. Steffy hinted that she couldn’t pretend anymore, so she could argue that she’s still mad at Bill after all.

Regardless, Liam will buy whatever Steffy’s selling. He’ll urge his wife to relax and accept that everything’s fine. Of course, Steffy won’t be able to do that. This secret will continue to worry her, so she’ll choose to have another conversation with Bill. He’ll try to stop Steffy from spinning out of control.

Steffy will contend that shockers like this have a way of getting out. She’s certainly right about that! A secret this huge has never been swept under the rug in the soap world. However, Bill will believe they can keep a tight lid on their dirty deed. The Bold and the Beautiful spoilers say Bill will want Steffy to stay calm and focused. If she remains in this panicked state, Liam could develop major suspicions.

Speaking of suspicions, Ridge (Thorsten Kaye) will have some as well. He’ll feel like Thorne (Ingo Rademacher) is up to something, so he’ll ask Brooke (Katherine Kelly Lang) what she knows. When Ridge finds out about Thorne’s new design dreams, he’s not going to be happy.

Ridge likes to be the golden boy and lead fashion designer at Forrester Creations. He won’t like the idea of Thorne moving in on his territory. B&B spoilers say Thorne’s affection for Brooke will cause trouble, too. Ridge and Thorne will have several heated confrontations this week. They’ll take sibling rivalry to a whole new level!

Thorne will declare that Ridge is done mistreating people, especially Brooke. He’ll definitely be livid over Ridge’s actions. The Bold and the Beautiful spoilers reveal that Ridge will fight back, so this war is sure to get fierce. We’ll give you updates as other B&B news comes in. Stay tuned to the CBS soap and don’t forget to check CDL often for the latest Bold and the Beautiful spoilers, updates and news.