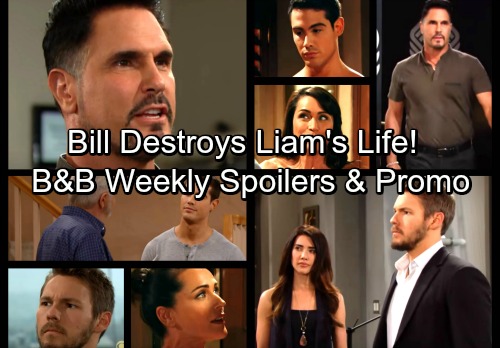 The Bold and the Beautiful (B&B) spoilers for the week of October 9-13 tease that Katie (Heather Tom) will struggle to keep her secret under wraps. It looks like the trouble will start during a chat with Brooke (Katherine Kelly Lang). After Katie mentions Ridge (Thorsten Kaye) and Bill (Don Diamont), she’ll want to know which man Brooke is leaning toward.

Brooke just can’t seem get past what Bill has done. However, she won’t be ready to make any predictions about her future with Ridge. Everything’s still pretty overwhelming right now. Brooke will shift gears and ask about Katie’s prospects. She’ll wonder if anyone has caught her sister’s eye lately.

When Katie lights up, Brooke realize there’s indeed a new man in her life. Brooke will urge Katie to spill the identity of this hottie, but Katie will refuse. Still, it’s clear that people are starting to get suspicious.
Eric (John McCook) will continue to keep quiet about Katie and Wyatt’s (Darin Brooks) romance, but he won’t like leaving

Quinn (Rena Sofer) in the dark. Of course, Eric really needs to focus on a looming threat. Mateo (Francisco San Martin) is working with Sheila (Kimberlin Brown) and that could mean bad news.

The Bold and the Beautiful spoilers say Mateo will get up close and personal with Quinn during a deep massage. He’ll hope that he can pull off Sheila’s plan and get his hands on more cash. Mateo obviously won’t seduce Quinn in one day, but he could make some progress.

Eric will thank Mateo for taking such good care of his wife, but his attitude will change a little later. It seems Sheila will drop a hint that leaves Eric concerned. B&B spoilers suggest that Eric will eventually set some boundaries. He won’t want Mateo to pose any kind of risk, but Sheila has other ideas.

Elsewhere, Bill will rev up his revenge scheme. He hoped Liam (Scott Clifton) would come around, but the usual Spencer stubbornness is getting in the way. Bill will decide he simply has no choice. He’ll put his payback in motion and assure Liam that his life is about to go up in flames.

It looks like Steffy (Jacqueline MacInnes Wood) will become Bill’s pawn, so this should be a real mess! We’ll give you updates as other Bold and Beautiful details emerge. Stay tuned to B&B and don’t forget to check CDL often for the latest Bold and the Beautiful spoilers, updates and news.