The Bold and the Beautiful Spoilers: Wyatt Sabotages Liam For Bill With Daring Move 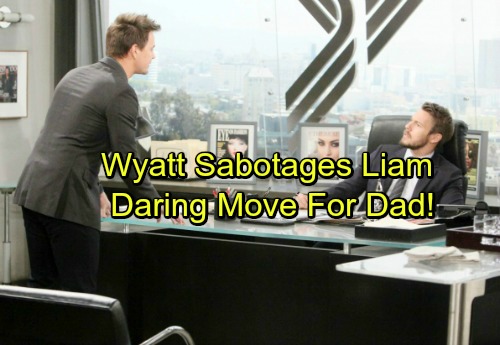 The Bold and the Beautiful (B&B) spoilers tease that Wyatt (Darin Brooks) will prove his loyalty next week. He knows better than to turn his back on Bill (Don Diamont) at a time like this. Wyatt feels bad for his dad, but that’s probably not the main reason he’s standing by him. If Wyatt dares to cross his father like Liam (Scott Clifton), he could become Bill’s next target.

Wyatt would prefer to avoid being on the receiving end of Bill’s wrath. Plus, this is Wyatt’s chance to become the new golden boy. Wyatt has always been a bit more like Bill anyway. He’s not as much of a boy scout and he’s willing to be a devoted soldier. Bill will undoubtedly appreciate Wyatt’s continued support.

The Bold and the Beautiful spoilers say Wyatt will make a daring move to show he’s on Bill’s side. He’ll convince Bill that he’s behind him 100 percent. Will Wyatt sabotage Liam’s agenda at Spencer Publications? If so, Liam isn’t going to be happy. He just might have to add Wyatt to his list of enemies.

Liam will fight back once Wyatt crosses the line, but his brother won’t scare easily. It’s not like Liam is a force to be reckoned with or anything. He may have gained the upper hand, but he’s nowhere near as sneaky and powerful as Bill. B&B fans should see Liam’s downfall eventually.

As long as Wyatt has Bill in his corner, he won’t be afraid of any plot Liam might cook up. However, Wyatt will battle another kind of fear. He’ll open up to Katie (Heather Tom) about the toll this war is taking on his family. Wyatt will worry that there may be no coming back from such fierce conflict.

Liam is driving Wyatt up the wall right now, but they’re still brothers. Wyatt feels like he’s being forced to choose between two family members. He won’t hesitate to choose Bill, but he’ll hate the idea of losing his relationship with Liam.

Katie will promise to be there for Wyatt, but he’ll remain concerned about the future. Another Spencer storm is brewing, so they’ll all need to be prepared. At least Wyatt’s loyalty will score him some points with Bill. That should be helpful once Wyatt and Katie’s romance is exposed.