BY Kinsley Goldman on September 28, 2017 | Comments: one comment
Related : Soap Opera, Spoiler, Television, The Bold and the Beautiful 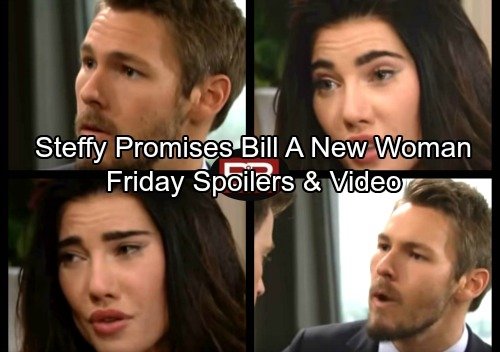 The Bold and the Beautiful (B&B) spoilers for Friday, September 29, tease that Liam (Scott Clifton) will try to get Wyatt (Darin Brooks) on his team. He’ll think it’s time to put fear and loyalty aside. Liam feels like standing up to Bill (Don Diamont) is the right thing to do. He’ll hope that Wyatt can be persuaded to join his fight.

Naturally, Wyatt will resist the idea. He’ll insist that despite Bill’s misdeeds, family has to come first. The Bold and the Beautiful spoilers say Liam will refuse to put their father over morals. Instead, he intends to carry out big plans at Spencer Publications.

Liam will encourage Wyatt to be part of those plans. He’ll suggest that Wyatt can be his right-hand man. Liam will think Wyatt should help him steer the company in a different direction. This is their chance to make the Spencer name stand for real values.

As Wyatt continues to whine, Liam will urge him to embrace this new era. He’ll argue that they can be at the top together. Unfortunately, it looks Wyatt will turn down the offer. He’ll warn that Bill’s wrath is sure to be swift and devastating.

Other Bold and the Beautiful spoilers say Steffy (Jacqueline MacInnes Wood) will give Bill another pep talk. She knows he’s hurting at the moment, but she won’t think the pain will last. Steffy might point out that Brooke (Katherine Kelly Lang) could still come around.

Bill will indicate that Brooke’s decision felt awfully final. He’ll worry that his soul mate is gone, but Steffy won’t think it’s that serious. She’ll contend that a new woman will walk into Bill’s life. Steffy will insist that Bill will forget about Brooke eventually.

Bill could never erase all that B&B history, but the new woman part may be true. In fact, a lucky lady may already be in the picture. Bill seems to be tightening his grip on Steffy, so she may become his path to vengeance.

Steffy wants to be a friend to Bill, but they’re moving into dangerous territory. How long will it take them to cross the line? We’ll give you updates as other B&B news comes in. Stay tuned to the CBS soap and don’t forget to check CDL often for the latest Bold and the Beautiful spoilers, updates and news.