The Bold and the Beautiful Spoilers: Brooke Makes Bold Choice For Ridge – Bill’s Hangover Hurts, Can He Recover? 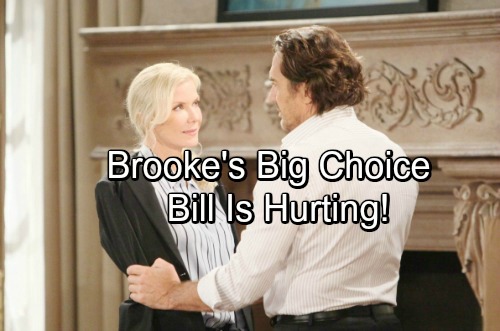 The Bold and the Beautiful spoilers tease that Brooke (Katherine Kelly Lang) made the best possible decision for herself and for her husband. She could no longer trust Bill (Don Diamont) and had to oust him from her life because of his reckless behavior.

‘Dollar Bill’ hasn’t been permanently crippled. He’s suffered a major personal setback. But he’ll recover and surely won’t have a problem attracting another female to the aura that Brooke admitted she was fascinated by.

Brooke has a checkered history on B&B. But what residents shown in this part of Los Angeles have not? Her path forward veers toward Ridge (Thorsten Kaye). Yet savvy soap fans know not to consider anything as certain until it happens and then they need to withhold applause to make sure that a dream sequence, or a daytime daydream hasn’t been scripted. 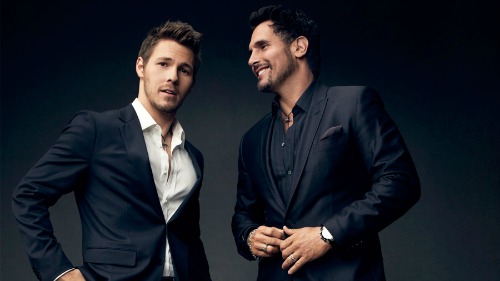 Reuniting with Ridge surely seems plausible, if not likely. They’ve been hitched on numerous occasions and retain deep feelings for each other. Plus R.J.’s (Anthony Turpel) thoughtful encouragement serves to focus each character’s thoughts.

Meanwhile, back in Bill-land, Diamont’s character has been boxed in. First, he lost control of his company. Well, he was blackmailed out of the CEO’s chair by Liam (Scott Clifton), who’s proven to be far tougher than Bill ever considered. Then, he told Brooke what happened, she exploded and left. The next time they spoke in person, she removed her rings and said goodbye.

Even the most ardent Bill supporter has to agree with the man’s own assessment of himself. His zeal to build Sky pushed him beyond reality. He was drunk on an equal mix of existing ego and a never-ending quest for more power.

Bill’s lengthy state of inebriation led to a horrid hangover. Stripped of the image he’d created and suddenly single. Yes, life clenched its fist and punched Bill as hard as possible in the face, knocking him down, but not out and leaving an ugly scar.

Striking Liam, even more than ordering the torching of the building where Spectra Fashions worked and will work again, woke Bill up, or so he believes. Recognizing recklessness could be sobering, depending upon the persona.

A path to redemption isn’t clear, won’t be simple and may not result in a restoration of the life Bill built. Brooke won’t be coming back and Liam is quickly reshaping what Spencer Publications is. Both facts will force Bill to have a different personal life and a changed family business for him to return to, someday, if he can.

One couple is falling apart at the seams while another is falling head over heels. Tune in this week on #BoldandBeautiful!

A line was crossed… now he could lose everything! Don’t miss all the family drama this week on #BoldandBeautiful!