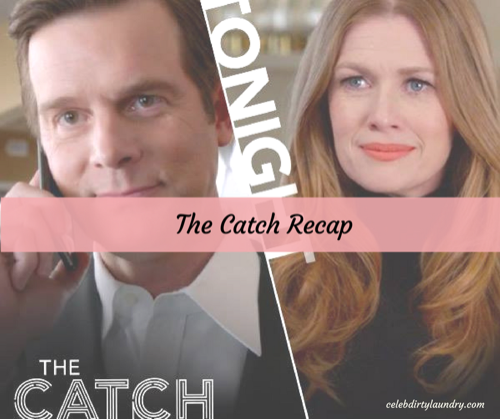 Tonight on the ABC The Catch airs with an all new back to back Thursday, March 9, 2017, season 2 premiere called “The New Deal,” and we have your The Catch recap below. On tonight’s The Catch season 2 premiere as per the ABC synopsis, “In the second-season opener, Ben (Peter Krause) confronts his past from behind bars. Meanwhile, Alice and her team come to terms with the blurred lines they now share with people on the wrong side of the law.”

Tonight’s The Catch recap begins now – Refresh Page often to get the most current updates!

Ben is in his cell dreaming of Alice and is then led to meet with Alice in the visiting room. She says she has to get Margo so he can be free. He tells her to leave Margo alone. Switch to Margo entering a board room. Several men at the table text and ignore her as she speaks. She calls on one of the men and shoots him. All the men then give Margo their full attention. Alice and Val give a prospective client a tour of their offices but he is concerned that the company is still under investigation by the FBI. Val answers they aren’t while at the same time Alice says they are. The client decides not to go with their firm.

A call comes in that someone broke into Alice’s house and she immediately thinks it is Margo but it is actually Alice’s brother, Tommy. He needs Alice’s help. Someone has put 3 million dollars in a bank account with his name on it and now the IRS wants him to pay taxes on it. He needs help finding the money and to figure out what is going on.

Ben meets with the FBI and is told he could get out of prison tomorrow but he has to work undercover. Ben isn’t sure. Tommy, Alice and Val try to figure out who would know his social security number. The FBI meet with Alice and Val to let them know Ben has taken their deal. Alice is not happy.

Margo is upset that three of her lieutenants didn’t attend the meeting. She is being disrespected and realizes her mother is behind it. She says she has to kill her mother. Ben is stabbed in the prison shower. He wakes up in Rhys house and he tells Ben he staged the stabbing to break him out of prison. The FBI tells Alice that Ben is missing. As they talk Ben calls to let her know he is OK. Agent Diaz tells Alice that the deal is now off. Ben will rot in prison when he is caught.

Margo meets with her mother in prison and accuses her of sabotage but she denies it. Margo believes her and realizes she has another enemy. Rhys tells Ben they have to break into a safe to repay the men who helped him break Ben out of prison. Ben is not thrilled but will do it for Rhys.

Tommy is staying with Alice and is excited that she has figured out there is a Swiss bank account with his name on it. They drink bourbon and share stories. Ben and Rhys job involves stealing a briefcase that is kept in a locked safe. They decide they can’t break in due to the high tech security system so they come up with a cover to walk right into the home. Tommy’s last employer is the one who opened the bank account so Alice heads to their house and finds them dead. Tommy acts sad but then asks if can keep the money. Alice tells Tommy if he takes the money he will be dead. He doesn’t care and starts to leave to get the money. Alice will call the FBI if he goes for it. He accuses her of trying to keep him down.

Margo confronts Rhys to see if he is involved in the problems she is having. He denies it then she asks for his help. He refuses and wishes her luck. Agent Diaz tells Alice if Ben doesn’t turn himself in within the next 24 hours she will be forced to arrest Alice. Alice admits that he called her once but she hasn’t heard from him since.
Ben goes to Olivia’s house disguised as her masseuse and gets into the home easily. He drugs her and steals the briefcase. Before they leave the house Rhys opens the case to find frozen sperm. Olivia comes to and points a gun at Ben and Rhys, demanding they return the case. Ben throws the vial and it breaks. Olivia slips and is knocked unconscious. Just then Alice and Agent Diaz enter and Ben is arrested again. Agent Diaz will give Ben a new deal if searching Olivia’s house turns anything up.

Tommy returns because he can’t access the money without Alice’s password which she refuses to give him. Tommy walks in on Alice and Ben in bed. Margo continues to try to figure out who is targeting her company. Her boyfriend is shot in the head as they talk. Margo appears in Alice and Val’s office and says she needs to hire them ASAP.