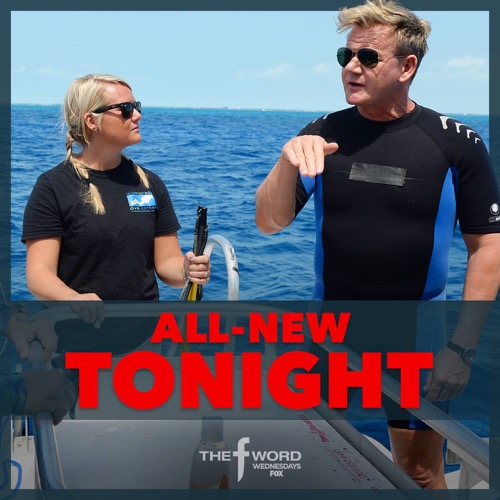 Gordon Ramsay welcomes us to The F Word Restaurant where the kitchen is in full swing with team Slaw and Order competes against The Food Bosses battling it out for the win. They are making New York Strip steak with mushrooms and smokey barbecue sauce. Each team needs to serve 50 dishes and who ever gets the most votes from diners wins the night and could compete in the finale for $100,000.

Later he will be cooking side-by-side with Andy Cohen; he will also be deep sea diving to hunt and cook a predator decimating the Florida Keys and finally will be spending Father’s Day with his daughter Tilly attempting to set a new Guinness World Record.

Slaw and Order is a team of 4 beloved police officers from Peachtree City, Georgia. Stan, Mark, Justin, and Heather are the four cooks. Stan is the captain of the team and will do the plating while Mark is the main grill, Heather is their everything and Justin is on the mushrooms and potatoes. Whitney Webster is their sous chef, he tells them to devide and conquer.

Food Bosses is a team of 4 family members who left the city life for something simpler. Bryon is the single father of Audry, Madison (Mady) and his wife, Darci a wonderful mother the girls always needed. Chef Ramsay wonders if they are boss enough to survive The F Word kitchen.

Bryon is plating, Mady is on mushrooms, Audry is on potatoes and Darci is on the grill. Byron is more than willing to let Darci be the team captain, he tells them to divide and conquer and tells Bryon to stop sweating.

Chef Ramsay then takes us to his home kitchen where he shows us how to cook a beautiful New York Strip steak, saute the mushrooms, then cooking fingerling potatoes. He plates it on a beautiful smokey barbecue sauce.
We return to find Slaw and Order has served 22 dishes. He goes to their kitchen, telling Mark his pans are not hot enough and to not cook in a dirty pan. He shows him how to cook the steak and rendering the fat.

Gordon Ramsay goes to meet Andy Cohen, explaining they will be cooking side-by-side but there will be a wall separating them and although he will be with him every step of the way, he needs to follow his voice and directions; Andy is concerned that he is a screamer and he talks fast. They will be cooking chicken breast, mushrooms and potatoes and roasted carrots. Andy doesn’t like carrots.

Andy says he doesn’t cook, he only uses his toaster oven to reheat food. Gordon continues to cook his food while Andy has no clue what he is doing. He asks Gordon if he thinks he is dumb, but Gordon shouts its just that he doesn’t cook enough.

Andy pierces the chicken with his fork and Gordon says he just let all the goodness out of the chicken. Andy jokes that he is doing sauce with Gordon Ramsay. As they are making the sauce, Gordon tells him to add some cream to it; Andy thinks he is making a mistake and Gordon scoffs at him but Andy says no one would tell Gordon he is making a mistake because people are afraid of him.

They call each other a nightmare as they plate. Gordon smells something burnt and Andy presents his plate with a burnt sauce pan. Gordon laughs at his plate and tells Andy the exciting part is they get to taste each others dish. Andy is thrilled saying Gordon’s dish is delicious and Gordon laughs that Andy’s is okay but he was a let down with the chicken. He tells Andy to keep cooking as there is hope for him yet.

Chef Ramsay heads into the Food Bosses kitchen who have served 18 dishes. He told them everyone is loving their dishes but is worried about Audry burning herself. He shows them how to cook the mushrooms correctly and reminds them to always think the pans are super hot. He tells Mark to try not to sweat into the steaks, showing him how to render the fat and cook it properly.

Gordon rounds up the teams telling them Slaw and Order has served 30 dishes but only 20 are willing to pay; the biggest complaint being the uneven cook. He tells Mark to slow down on the cooking and switch it up. He reminds them to keep up their standards.

Team Food Bosses has served 26 diners and 22 of them have agreed to pay. The one issue diners have is the mushrooms are slightly oily. He reminds them to not drop the mushrooms until the pan is piping hot. He encourages them to raise their game.

Gordon Ramsay heads out to Florida Keys to meet Eric and Grace who are a husband and wife team who spend their lives hunting down this predator, the lion fish. A predator that was carelessly dumped into the ocean by an aquarium owner; they belong only in the Indian Ocean.

They are going to catch some and he will show them how to cook them into a beautiful meal. Eric shares how painful the venom is from the fish; Gordon has been diving for 20 years but never with a mission like this, they go 80 feet to the ocean floor to begin hunting. Gordon holds the fish commenting on how ugly it is. He shows them how to make Caribbean Fish Curry on the grill. Eric says the bar is high now when they attempt to grill the fish again.

Joel McHale, the comedian, greets Gordon by introducing him has Jamie Oliver to everyone. Gordon asks him why he is grilling food when he was invited to his restaurant. Joel says Gordon needs to see how bad people cook compared to him. Joel says he is about to poison a lot of people tonight.

He jokes that he is grilling chicken and then says it is soft shell crab and in the other barbecue is sliced beef tips. He hands Gordon a whole steak to try after he says he loved the meat. When Gordon takes a bite he begins to cough asking for a drink. He spits out the meat as Charity hands them his favorite beer.

Joel jokes about how he has several failed TV shows in the past few years. Joel picks up his huge hunting knife talking about how many times he cooks at home. He says if he is home, he is the one cooking. His 12-year-old greeted him as “Jobless Joel” and his 9 year old jokes when he raises his voice says, “Its scary daddy!” and pretends to run away. They attempt to serve some diners with his food but no one wants it.

Slaw and Order has served 34 dishes and Food Bosses served 36 dishes but as Gordon asks some diners what they thought of their dish, one complains that the F was on the wrong side, so presentation wasn’t right and he wouldn’t pay. Gordon tells him to shut up. They also reveal the sauce under the steak wasn’t barbecue but more like a tomato paste or ketchup.

He returns to the Food Bosses’ kitchen telling them feedback says they need to watch the seasoning on the mushrooms and potatoes. He tells them to keep it going as they have a great system and doing well.

In the Slaw and Order kitchen, he says they are still getting complaints on the uneven cook of the steak. He tells them to cook them less and let them rest longer. He says they need to get this back. He leaves to meet Saturday Night Live’s Leslie Jones on the balcony. He jokes that he is tipsy from hanging out with Joel who got him drunk.
They talk about her acting live, and how she needs the support of the cast because someone always has to jump in and save her life. He congratulates her on the BET Awards. He thought it was only for 60 minutes but she says that it goes on for 3 hours and 30 minutes. She jokes, asking him to come cook for her then. Her “pick me up” dish is her Aunt’s spaghetti but won’t reveal her sauce recipe.

He asks her if she is ready for a little competition. She says she loves her grits so he wants to know if she knows her flavors. The first one is white cheddar and she says butter. Second one she says it’s something gummy, it was Squid and she tries to spit it out after saying he tricked her. Next one is Durian fruit, she says its nasty, spitting it out in front of everyone. She says it tastes like poop asking if it has to do with Duran Duran. Number four is lychee fruit. She says it taste like flowers; she asks if it was leeches. The last one is grasshoppers. She says it doesn’t even look like grits. She scream that it taste like poop and fakes vomiting, praying as she shouts he fed her grasshoppers.

Gordon Ramsay is about to bring the captains together as he tastes their dishes. Slaw and Order has served 46 and Food Bosses have served 44. Darci and Stan arrive. Food Bosses sear is great, seasoning is good. She says the hardest thing tonight is trying not to burn herself. She says Bryon is obsessed as this is his art.

Slaw and Order’s Stan learns his plating is great, the steak needs a little more sear and has no rub on it. He says to cook it less and let it rest more. He tells them this is the final push.

Gordon and his daughter, Matilda (Tilly) head out to attempt another Guinness World Record, cracking eggs, one handed with a partner. It will be the Ramsay Family versus the McCurdy family’s Ross and his daughter Mira. There are two judges to verify the record, the mark to beat is 28 eggs in less that 30 seconds and no shells in the glass.
They have a new record today, one team got 29 eggs but the other got 33 eggs; the team who set the Guinness World Record was Ross and Mira. Gordon takes an egg and shakes hands with the judge.

The kitchen is officially closed, telling them they have gone a great job. He wishes Stan, captain of Slaw and Order, a Happy Birthday and they give him a pie. Everyone is impressed that the daughters had burned themselves and just kept on going. The results are in, one team 30 out of 50 would pay and other team 34 out of 50 would pay. The winner for tonight’s The F Word is FOOD BOSSES!