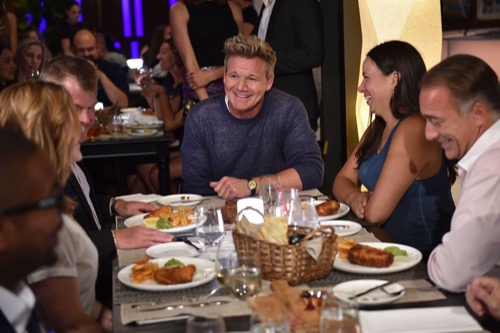 Tonight on FOX Masterchef returns with an all new Wednesday, July 19, Season 8 episode 7 called, “Episode Seven,”  and we’ve got your MasterChef recap down below! On tonight’s MasterChef Season 8 episode 7 as per the FOX synopsis, “Families and friends battle it out in a high-stakes cook-off with hopes of impressing Ramsay and special celebrity and VIP guests. During the battle, Ramsay will host special cooking demos and out-of-the-kitchen adventures.”

So make sure to tune in between 9 PM – 10 PM for our MasterChef recap.  While you wait for our recap make sure to check out all our Masterchef spoilers, news, videos, pics & more, right here!

The F Word begins with Gordon Ramsay welcoming everyone to The F Word restaurant carrying a huge barrel of Marsala wine; he is losing his voice but says the show must go on. Tonight’s teams are the Military Wives Club and the Gourmet Gypsies. The dish they will be making is Veal Marsala with a new twist, each team will choose their own two sides; both struggle with the flavoring.

Team Military Wives is lead by Team Captain Tracy. She introduces her team as herself, Leah and Terri are Navy wives, while Jessica is a Marine’s wife. They cook all over the world as they have to adapt to wherever they are stationed. She says they are in it to be strong and fierce and not be in the shadows of their husbands tonight. He reminds them we are live so they cannot curse.

Team Gourmet Gypsies consists of Team Captain Gabriella, who is mother to Alex, Rachel and Eric. She says she is a super taster but admits she doesn’t have a palate as good as Chef Ramsay but she is really good. Rachel shares that when they lived at home, everyone ate at the table 5 days a week. Alex jokes that his mom has toned it down a bit for the show and their dad isn’t there because he is super nervous about them being on TV. Ben Kronick is the sous chef for Gourmet Gypsies and Whitney Webster is there for the Military Wives.

Both teams really struggle with the stress of making their own sides; they are worried about having so many cooks in the kitchen and needing to narrow down the choices. With 2 hours left, both teams make a decision and pray the diners will enjoy their food.

Tracy for Military Wives chose Parmesan Risotto, made with white wine, chicken stock and parmesan. He worries they are setting themselves up for failure because risotto could be a dish on its own and tells them not to serve too much of it.

Gabriella for Gourmet Gypsies decided to risotto with crème fraiche and parmesan cheese, very similar to their opponents. For the vegetables, they are doing zucchini, carrot and yellow squash with cayenne and shallots. He wishes them good luck while he shows fans how he would make his veal marsala.

Back in The F Word Restaurant, Gordon sits with Cheryl Hines; he brings up her appearance on the MasterChef Special where she had been drinking too much. She says its because the competition was about beer! She is given a drink called the Larry David at the bar and she jokes that it really tastes like Larry David. Cheryl then tells Gordon how she was a waitress and knocked a customer out with her tray.

They are going to play a game, where Gordon brings her to a table where she is going to fill up the glasses of win with a bit of finesse. The twist is they have to be blind folded, he tells her to study the wine glasses and they have 30 seconds to fill the glasses. Gordon removes his blindfold and cheats his way through it, while Cheryl pours her wine all over the table. Gordon steals her glass and she begins to pour widely all over the table. Gordon reprimands her for what she has done; she wants to know if he cheated and he admits he took a sneak peek.

Gordon and his daughter Tilly return for a rematch in the egg cracking competition four weeks earlier. He wakes Tilly up with an air horn and trains her so they can learn from their mistakes – he says they were Tilly’s mistakes. He tells her to have eggs on her mind and not boys! He doesn’t care that his methods are unorthodoxed, he simply wants to win.

In the F Word restaurant, Mira and Ross McCurdy return to defend their Guinness World Record of cracking 33 eggs in less than one minute. Both their families are behind them to witness the competition. Michael and Alex are there for the rules and to judge; they are reminded if there is a shell in the cup its a deduction.

The results are in, the McCurdy team admits it was harder because there was a lot more noise when they are doing it live. He jokes that the judge cannot count one cup as he tosses an egg shell in one of the Ramsay family cup. Tilly says they did okay but Gordon tells her okay isn’t good enough for him. McCurdy family had 26 eggs while the Ramsay family had 31 eggs, which means they did not beat the World Record still held bu the McCurdy family; Gordon smashes an egg on Michael the judge as he returns to the kitchen.

The restaurant is half-way through service when Gordon calls them together, he tells them both teams’ performance is incredible. Military Wives have served 27 dishes and 24 are happy to pay. Gourmet Gypsies served 26 dishes but only 19 are willing to pay. He tells them they can still pull it back as they are only behind 5 dishes.

Gordon meets with Eric Stonestreet where they are going to make a French-style omelet together. Eric is to follow Gordon’s direction as they compete against each other. Eric is cutting everything that isn’t a shallot, including celery. He has no idea what he is doing but tries to keep up him. Gordon tells him to fold but he doesn’t know what he was folding for the past 5 minutes.

When they turn, Gordon asks him if he dropped his omelet, Eric laughs that Gordon has to eat his dish while he gets to enjoy Gordon’s dish. He tells Eric the taste is 8 out of 10 but presentation is minus 10 but thanks him for the fun in the kitchen. Gordon tells Eric to keep his day job!

Chef Ramsay calls for the captains of both teams while he tastes their dishes. Tracy says Leah plated the dish and she glazed. He tastes the Military Wives dish saying they are off to a great start but the risotto is on the verge of becoming mushy and they need to add a bite to it. Gabriella says she plated her dish and Alex cooked the veal while Eric did the risotto. The veal is overcooked, it needs to quickly sear and rest. He encourages them both to have a strong finish.

Justin Hartley and his fiance Chrishell Stause are his guests in the restaurant. He congratulates them on their engagement and wedding will be in October. She jokes that the food for the wedding isn’t as high on the list as the dress. Justin admits they eat out a lot, they enjoy food but love people cooking for them. He says they have a beautiful kitchen but they need help figuring out what to do in it. Justin shares a little bit about the NBC hit series This Is Us.

Gordon challenges Justin to a cannoli challenge where they have 60 seconds to fill cannolis and decorate them with a little finesse. He learns he isn’t competing against Gordon but Cheryl Hines. He explains how to make them and then gives them one-minute to do it. Justin begins to dust them and they both steal from the other their completed cannolis and begin eating them, Justin even steals some from her plate, but by the time runs out, Cheryl steals all but one of Justin’s. Chef Ramsay calls her out on her cheating and declares Justin the winner.

Just before he announces the winner he is able to lace up his spikes and join the LA Galaxy team as they prepare to battle it out with Manchester United. They make fun of him when he goes to the pitch instead of the training field, one even calls him a moron. Its been years since he has been on the field with players this good and wonders if he can hold his own.

He is challenged to a penalty kick, he is able to get the ball in the net and proves he still has it. For those who don’t know, before Gordon Ramsay became the famous chef he is today, he was a football (soccer) player for Warwickshire but when he had a tryout with Rangers, he injured himself so severely his footie career was over before it began. After practice, Gordon makes lunch for the football players.

The F Word Kitchen is now closed, telling both teams they did a great job. Chef Gordon Ramsay brings out Traci’s husband, Bill Maloney, Navy Lieutenant as a special guest. Tracy is thrilled because he was out to sea and she wasn’t sure he would see it. The results are in and Kayla gives him the paperwork. One team32 out of 50 diners said they would pay while the other team had 42 out of 50. The winning team tonight is Team Military Wives Club.