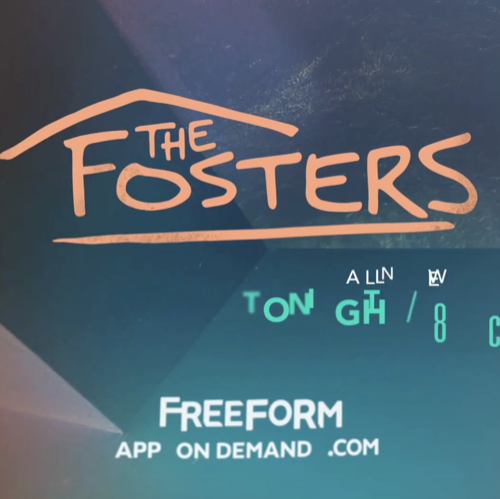 Tonight on Freeform their hit drama The Fosters returns with an all new Tuesday, February 14, season 4 episode 13 called, “Cruel and Unusual,” and we have your weekly The Fosters recap below. On tonight’s episode as per the Freeform synopsis, “Callie (Maia Mitchell) rejects a proposition from a guard in juvenile hall, making an enemy in the process. Meanwhile, Callie’s father is angry at Stef and Lena; Brandon puts Mariana in a bad position; Jude gets another chance with Noah and Mike makes big decisions.”

Stef sits staring into space barely able to speak. She then starts taking the bedroom doors off of each of the kid’s rooms. The kids object but she says until she can trust them the doors stay off. Robert shows up at the front door and asks Stef when she was going to tell him Callie was in juvie again. Robert offers to call his lawyer but Stef doesn’t want help. He leaves after she agrees to keep him posted. Joey, the guard in juvie, tells Callie he wants to party with her but she says she is not interested. AJ has breakfast before he leaves for school and asks Mike to get him on Callie’s visiting list. Mike and Anna are worried that Callie will be tried as an adult and sent to prison. Mike asks Anna to move in with he and AJ. She says yes and they kiss.

Callie is on the yard and a tough girl tells her to stay away from Joey, he is hers. Another girl tells Callie that Joey has sex with every girl he can in juvie. Lena doesn’t agree with Stef’s decision to remove all the bedroom doors but they go to visit Jesus. His doctor wants them to remember that recovery from a brain injury can take a lot of time. After some tests the doctor tells them he is optimistic but Jesus will need round the clock care for a while.

Monty asks Lena if she finished the budget report but Lena was too busy with Jesus. Monty tells Lena it is OK if she needs to take a leave of absence but Lena says they can’t afford it. Jude and Noah meet in the hall and kiss. Noah gives Jude a letter and hopes it makes him smile. Lena watches as they walk away holding hands.

Stef and Callie meet with their attorney in juvie and learn she was able to get the adult charges dropped but Callie will have to plead guilty as a minor and stay in juvie until she is 18. That means 8 months in juvie. AJ tries to leave a letter for Callie but is told he has to mail it. As he is leaving her runs into Robert and introduces himself.

Mike tells Stef that he asked Anna to move in with him but she reminds him Anna has a record and CPS won’t allow it. Robert tells Callie he is there for her and wants to help if he can. He also delivers AJ’s letter which makes Callie smile. Callie and Robert talk about what she should do. If she refuses to plead guilty and loses her case she could be in prison for 5 years.

Mariana visits Jesus and is very upset by his confusion. Stef tells her she has to be brave for Jesus. Stef also tells her she has to stop disobeying Lena and Stef. She promises Mariana that they don’t blame her for what happened to Jesus but that she needs to get back into therapy to figure out why she keeps making bad decisions. Mariana agrees. Callie reads the letter from AJ and is happy that he says he loves her in it.

The girl who threatened Callie is sick so she calls for a guard. A female guard asks Callie what the girl was on and says they are taking her to the ER. Mike returns home for dinner and Anna has everything prepared. Lena asks Stef how much longer can they handle the situation with Jesus. Lena tells Stef that she saw Jude with Noah and that she got into Jude’s locker to see what Noah gave him. She found a horribly written but heart felt poem. They decided that Jude has lost too much and that they shouldn’t keep the two boys apart.

Callie is moping as Joey appears and starts to give her a hard time. He asks why she got help for the sick girl and now the boss knows there are drugs in juvie. He takes Callie’s mop bucket and breaks a window with it. He then calls for back-up and says Callie tries to hit him with it. She is taken away.

Brandon asks Matt if he and Mariana are having sex. He asks if she might be pregnant. Matt says no. Later Matt asks Mariana if she had sex with Nick. She says no but he tells her he can’t trust her and that he is done with her. Mariana confronts Brandon and asks why he said something to Matt about Nick. She tells him Amber was buying her tampons not a pregnancy test. She storms out.

Callie is in solitary confinement. AJ and Mike get ready to go to Callie’s hearing. Mike lets AJ know that he loves Callie and tells AJ that he wants to adopt him. AJ doesn’t respond. Robert shows up to the courtroom and angrily confronts Stef and Lena. He says he will sue for custody if they keep shutting him out. Robert tells Callie that she should plead not guilty but Stef and Lena says she should take the plea. Callie says she can’t go back to juvie so she has to fight the charges.

The prosecutor tells the judge that Callie is a serial recidivist and that she should be tried as an adult. The judge agrees and she is moved to adult court but is allowed to make bail and return home. Lena and Stef tell Jude that it is OK for him to keep seeing Noah but there can be no more pot. He excitedly agrees. Callie and AJ sit in her room and kiss. Lena and Stef tour the rehab facility for Jesus but decide to bring him home instead. Lena will take a leave of absence from her job to take care of him.

Brandon apologizes to Mariana but she tells him it isn’t his fault that Matt broke up with her. Lena gives Jesus his pizza but he gets angry and breaks the plate because he hates pepperoni. The whole family looks on in despair.