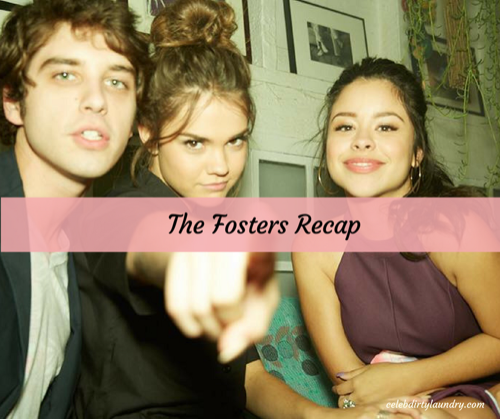 Tonight on Freeform their hit drama The Fosters returns with an all new Wednesday, March 14, season 4 episode 16 called, “Long Haul,” and we have your weekly The Fosters recap below. On tonight’s episode as per the Freeform synopsis, “Sharon (Annie Potts) and Will (Rob Morrow) announce that they are engaged. Meanwhile, Stef learns that her mom has second thoughts about getting married; Emma writes Jesus (Noah Centineo) an honest letter and Jude is teased at school when Lena holds an LGBTQ-friendly sex-ed class for students.”

Stef’s mother and her boyfriend Will are over for dinner. They are talking about their RV trip. They share that they plan to get married. Mariana suggests they marry at the house. Stef and Lena don’t look pleased. After some back and forth, they agree to hold the wedding.

Stef and Cali are doing the dishes. Callie has been quiet all night. She is scared about what is going to happen. Cali goes to bed. Stef’s mom comes in. She wants Stef to tell Will she doesn’t approve of their marriage. She didn’t want to say no because he asked in front of their friends. Stef tells her that she is a grown woman. She needs to talk to him.

At school the next day, Jude is harassed by two guys for the upcoming LBGT meeting at his house. Aj is talking to a girl when Cali comes up. She is jealous. Maybe they can date when she goes to prison. AJ tells her not to say things like that.

Jesus’ girlfriend Emma shows up at the Fosters. Brandon answers the door. She isn’t looking for Jesus, she wants to talk to Brandon about what is going on between them. There is this secret and she can’t face Jesus. She wants Brandon to give Jesus the letter she wrote. Brandon brings him the letter. Jesus tries to read the letter but the words are jumbled due to his head injury.

Jude tells Stef and Lena that the kids are teasing him. Stef suggests having it somewhere else. They suggest Noah should go too. They look in the backyard. Will and Mariana are decorating for the wedding. Stef’s mom still hasn’t told him.

AJ and Callie are at a scuba diving place and he doesn’t know why. Callie tells him she needs to question Kyle’s co-worker, Vanessa. He blows up and tells her not to go in. AJ goes in and finds out Vanessa doesn’t work there anymore, but her boyfriend Troy does. AJ leaves and gets into the car. Troy comes out and tells Callie to stop harassing him, hitting her car window. They speed off.

Will makes the family dinner to thank them. He toasts his relationship with Sharon and asks for Stef’s blessing. She gives it to him. Sharon has a change of heart.

Sharon visits Jesus with his meds before bed. He asks her to read the letter to him. She starts reading until she sees that Emma was pregnant, she changes what it says. She tells him to read the letter later when he is feeling better. Jesus sends her a voice text telling her that he understands and he loves her.

Stef and Lena arrive at the LGBT class. The turn-out was a lot better than expected. A lot of the kids came without signed permission slips. They didn’t want to tell their parents. Lena can’t turn them away.

Emma shows up to see Jesus and to attend the wedding. She asks him If he is good, he is, so she is. Jesus doesn’t know what she is referring to. Brandon helps prep the instruments for the wedding. Emma comes out. Brandon asks her if everything is okay. She says yes. She meets Sharon, who asks for help with her dress.

Stef is sad because their divorce papers came in. They are officially not married. Lena doesn’t think it is a big deal.

Sharon tells Emma she read the letter. She promises not to tell and wants to make sure Emma is okay. She supports her decision.

Noah and Jude are getting ready for the wedding. Noah asks what he thought about the class. Noah tells him that he hasn’t had actual sex yet and he isn’t ready either. Jude agrees.

Emma asks Jesus if they are really okay. Did he read the whole letter. He doesn’t want to talk about it. They search for their name cards at the table. Emma notices that Jesus cant read after he stares right at their place cards but says he can’t see their names.

It appears like it is going to rain. Will wants to get the show on the road. Mariana goes looking for her. She calls Stef to come see her after she finds her. Sharon tells Stef she can’t go through with the wedding. Mariana works to stall the wedding. Sharon tells Stef and Lena that being married to Stef’s father was terrible. She loved him until the tied the knot and then she wanted to kill him.

Emma tells Brandon during Grace’s comic act to stall the wedding that Jesus can’t read. He is just as surprised. It begins to rain. Grace exits the stage and Brandon commends her for her bravery. She kisses him.

Sharon tells Will about her worries and her nerves over getting married. Will reassures her, marriage isn’t a contract. He promises that they will always be best friends, even if they fall out of love.

Stef is worried about Lena – she asks her if she should be worried that Lena doesn’t care that they aren’t married. Stef wants to be equal, out and proud. Lena cries. She would marry her all over again.

Sharon and Will walk down the alter, but then they sit. Lena and Stef come out and walk up to the alter to tie the knot. Sharon asks Will – is he okay with all of this? He is! Lena and Stef exchange heartfelt vows. The storm gets crazy with thunder and lightning. Everyone runs for it while Stef and Lena share a passionate kiss in the rain while the others watch from inside!