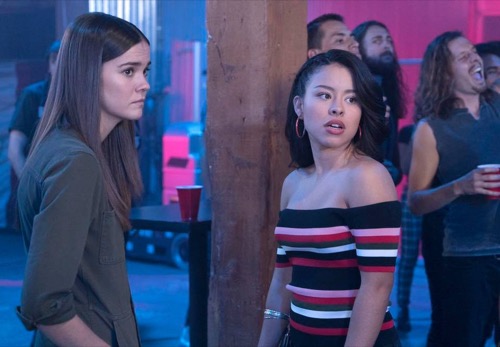 Tonight on Freeform their hit drama The Fosters returns with an all new Tuesday, August 8, season 5 episode 5 called, “Telling,” and we have your weekly The Fosters recap below. On tonight’s premiere episode as per the Freeform synopsis, “The kids secretly attend a party at the derby warehouse, but things escalate when the cops show up. Elsewhere, Lena struggles with Stef’s detachment from the family, as she becomes obsessed with her detective work bringing down a child molester.”

Ximena was having a party. It was this big thing that she had invited Callie to however she asked Callie not to tell Mariana because she didn’t want her sister finding out about the party. She said that she didn’t want her little Poppy to be around drinking! But Callie had thought that was a little odd because she didn’t know that Mariana was hanging with Ximena or Poppy. So Callie had later asked her sister about that and Mariana had downplayed her relationship with the two. She said that she was hanging out with Poppy and that it was good for her to have friends now that Emma was openly trolling her at school.

So Callie had accepted Mariana’s explanation though she didn’t really get a chance to go into anything with Mariana because Mariana was busy with the boy next door. The new neighbors have been sort of a sore subject around the house only Mariana didn’t mind their son and she was even prepared to do whatever it took to impress him. Like going running! Mariana wasn’t a jogger and so she had lied to a cute boy because she wanted him to take her with him. However, Mariana had pushed herself into keeping up and so she thought that she should further impress her crush by mentioning roller derby.

Mariana had said that she was trying out for a Junior Team and had then showed off some of her bruises to prove how tough the sport was. Though as it turns, Mariana knew about the party that Ximena was throwing and she was going to crash it with the rest of the Junior Team. So Mariana had invited Logan to the party because she thought that they wouldn’t run into anyone there so it was a bit funny when Callie did decide to go to that party. She thought that it would be fun and had asked Brandon to come along because she was worried about him. He had invited Cortney and her son to stay with them while they had everything handled and Callie feared that he would get sucked in like last time.

Last time, Brandon had started to miss school and had also emptied his bank account in order to take care of Cortney and her son. So Callie didn’t want Brandon giving up on what he had with Grace by getting too caught up with taking care of Cortney. But Brandon had said that Cortney’s stay was temporary and had been forced to pass on the party because he was going to meet up with Grace. Grace has been feeling a little ignored lately and so he had wanted to focus on her for the night yet funnily enough Grace thought the party sounded like a great idea and so she and Brandon ended up going with Callie.

They had told their parents that they were hanging out friends however Mariana had told her moms that she was going to a movie with Logan so they told her to bring along her brother Jesus. Jesus has been complaining about being stuck in the house and so his moms thought a night out would do him so good. Yet, Mariana wasn’t going to the movies and so she told Jesus he couldn’t go with them because they were really going to a party. So Jesus told her that if she didn’t take him that he would tell their parents that she was going to a party. And with Mariana already being on thin ice, she decided it would just be easier to bring Jesus along.

However, Callie had spotted Mariana at the party and she had been upset when she found out that Jesus was there as well. She thought it was dangerous for Jesus to be in that type of setting and so Mariana had tried to tell her that she talked Jesus into taking it easy, but he proved that to be a lie when he decided to head bang to some music and so Mariana had taken him to task for that. She reminded him that he had to take it easy and that he couldn’t go around scrambling his brain like everybody else. So Jesus got into trouble with his sisters for his unreasonable behavior and they would have kept on taking him to task if Brandon hadn’t taken the stage.

Brandon and his new girlfriend Grace have been practicing music and singing together. So they thought that it was time to finally play one of their original songs though their nice and sweet little song didn’t really mesh with the headbanging rocker vibe so Brandon’s siblings had been embarrassed. The three had seen how people were leaving the dance floor because they hated the music and so Mariana joked that she didn’t know who that was onstage. But the police showing up had thankfully put an end to Brandon and Grace’s performance. The police were responding to a noise complaint and they had wanted the party to be shut down.

Except Ximena didn’t think that was fair. She had gotten a permit for the party and everyone that was there had paid an admissions fee that would go towards raising money for the derby team. Though the police didn’t care about that and Ximena couldn’t afford to argue with them. She was undocumented and hadn’t reapplied for DACA because she didn’t want anyone to know where her parents lived. So Callie got Ximena out of there and Mariana stayed back to handle Jesus. Jesus had showed signs of confusion which usually means a tiny seizure so Mariana had timed him and then she had wanted to tell them mothers yet Jesus blackmailed her again.

Jesus said that he would tell their parents about roller derby if she didn’t keep quiet and therefore Mariana was going to pretend like nothing happened until she talked to Callie and Callie snapped at her. Callie had still been upset about Jesus going to the party and she was also hurt that Mariana had lied right to her face. Yet, Mariana had first tried to defend herself and said that Callie wasn’t perfect and so Callie had replied that anytime she lied it was because she was helping someone else and not for selfish reasons. So Mariana finally thought about her actions lately and she realized that she had been selfish as well as judgmental and even bossy.

So Mariana told Lena that she was doing roller derby and she also told her mother that Jesus had had a seizure. But Lena confronting Jesus hadn’t make him realize his mistakes. He said that there was nothing she could do because he was already forced to stay in the house however Lena got creative and she did find a way to punish him. She told him that Emma couldn’t come over for the next couple of weeks and that he could end up in inpatient behavioral center if he continued to throw things. So Lena had dealt with Jesus and she had tried to talk to Stef about what happened yet Stef had showed up in one of her moods.

Stef’s new job as a detective has her dealing with the worst of the worst and lately she’s been trying to catch a pedophile that uses boys that live on the street. However, Stef still remembers Patrick Malloy and how Patrick got of a molestation charge because of a crooked cop. So she’s been following him and with the stress of taking care of Jesus – she’s started drinking. Like needing a couple of glasses everyday when she gets home type of drinking. And so Lena finally had enough with her as well. She said she was tired of feeling like a single parent and that she needed her wife to be present at home.