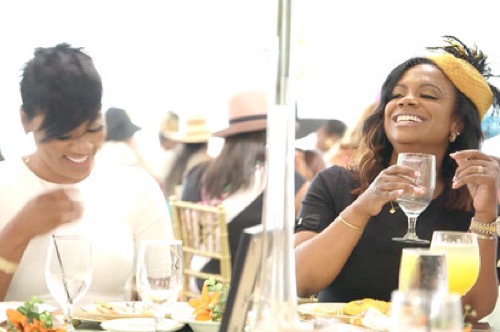 Tonight on Bravo The Real Housewives of Atlanta premieres with an all-new Sunday, November 12, season 10 episode 2 called, “Say Yes to Distress,” and we have your The Real Housewives of Atlanta recap below. On tonight’s RHOA season 10 episode 1, as per the Bravo synopsis, “After the showdown at Cynthia’s 50th birthday party, Porsha’s sister, Lauren, and niece, move into her palace. Cynthia struts her way back into the dating scene with a much younger beau. After the fallout from the painful history with ex-husband, Bob was made public, Shereé meets with a life coach to help get her life back on track. ”

This week on The Real Housewives of Atlanta Cynthia is still dealing with being fifty and single, but she has decided to rejoin the dating scene.Lauren brings Bailey, Porsha’s

Lauren brings Bailey, Porsha’s 19-month-old niece, out to stay while she deals with issues with her child’s father. Porsha tells her “If my door is closed don’t disturb me.” Lauren laughs and tells her “I think you have that reversed.” Lauren then asks her about Cynthia’s party. Porsha tells her “Kandi was there. She and I are good. Nene was there too and I confronted her about her saying she wanted me fired. She denied being fake as hell.” Lauren wasn’t surprised and she tells Porsha “Just watch out.”

Cynthia is out on a blind date with a mutual friend named Evan. He is a photographer. He surprises her with a photo shoot for their first date. After the shoot, Evan leads her into his studio which is set up for a romantic dinner. While they are having dinner Cynthia tells him “The person that set us up told me that you were 32 or 33.” Evan laughs and says “He lied to you.” Cynthia says “You’re what. 28?” Evan tells her “I’m 29.” Cynthia sounds genuinely disappointed as she tells him “I’m 50.” Evan doesn’t seem that impacted to hear it. She says “I just want there to be full disclosure here. You’re kind of young.” Evan laughs and says “You make it sound like I’m about to die.”

Sheree is meeting with her life coach Jack Daniels. She tells him “I was dealing with some very deep issues that I have suppressed for years and they were brought up a few months ago.” She goes on to say “I didn’t realize how deep the issues were and I don’t want to cry. You see I’m crying now.” Jack tells her “I need to know what those tears are about.” Sheree tells him “I suffered a lot of mental and emotional abuse from my ex-husband.” Jack asks her “Have you talked to your kids about this?” Sheree says “No. I didn’t want them to lose respect for their dad or for me.” Jack tells her “Your homework assignment is to choose a time to talk about this,” Sheree asks “Am I going to cry every time I come here?” Jack tells her “You’ll be all right.”

Kenya and Cynthia are talking about Kenya met her new husband. Kenya tells Cynthia “I met him at a restaurant. We were introduced by the chef. I feel so blessed because he is everything that I have prayed for. ” Cynthia says “I know you have a tough skin because you are used to all of the public scrutiny, but how is he taking it?” Kenya says “He is a very private person so he is not used to all of this. I feel like I have to be his protector.”

Kandi meets Shanea at Dupsie’s to shop for Shanea’s wedding shower. Cynthia joins the two ladies as they engage on a shopping spree for African garb for the bridal shower. Cynthia asks “Is Porsha coming to the wedding?” Shamea says “No. She said that she didn’t have the money to book a first class ticket to Kenya.” Kandi is relieved that Porsha won’t be there.

Kenya and her husband live in two different cities and every since the news of her marriage broke she has been dealing with a barrage of backlash. When her friend Brandon calls she breaks down and tells him “I didn’t sign up for this. Everyone is so negative about our marriage and bringing up my past.” Brandon tells her to ignore them and to just do her. Her friend Joy shows up and Kenya continues to break down. She tells her “I didn’t sign up for this. I don’t want to end up divorced.”

Sheree has invited Kandi and a group of her friends over to help her simulate a conversation with her kids about the abuse she suffered at the hands of their father. Kandi tells her “Remember that at the end of the day you can’t let the abuse take you away from you.” When Sheree simulates having the conversation with her kids she breaks down. Kandi asks her “How do you feel?” Sheree tells her “I honestly feel really good.

Cynthia’s daughter Noelle is preparing to go to Charlotte for the weekend. Noelle is considering a possible move to Charlotte. She tells her mom “Not as many people know me there.” She then asks her mom how she’s doing. Cynthia tells her about the date with Greg. She says “I thought he was 32, but it turns out that he was 28.” Noelle is a bit shocked. She tells her mom “Subtract three from his age and that’s half your age.”Everyone is headed to

Everyone is headed to Shamea’s bridal shower. Kandi is not happy when Kenya and Porsha show up and sit down at the table. Cynthia asks Porsha “Are you going to the wedding?” Porsha says “No. By the time I looked up the tickets they were too expensive and I have low blood pressure.”

The party is in full swing. Everyone is having a great time playing wild party games. Shamea calls Kandi, Sheree and a bunch of other ladies up to play a game which Sheree wins. After the game, Shamea calls Porsha out for not being a good friend. She tells her “You’re telling me that you might not come to my wedding and I’m still saving a place for you. Porsha is upset. She says “Even though there are people here who make me uncomfortable I still came out to celebrate you. What’s going on?’ Porsha tells Shamea “Physically I just can ‘t do it.” Shamea isn’t buying any of it and neither is Kandi.

Shamea isn’t buying any of it and neither is Kandi. Shamea says “Porsha you’re telling me you’re not coming to my wedding.” Porsha says “It’s about my health.” Shamea says “You need to figure it out.” Porsha gets really upset and decides to leave. Cynthia follows her outside. Shamea comes outside and tells Porsha “You put Phaedra before me and I never did that to you.” Porsha tells her “I apologize.” Shamea isn’t hearing it and won’t let it go. Finally, Porsha says “I have to go get Bailey.” Shamea gets out of the car and Porsha drives off.