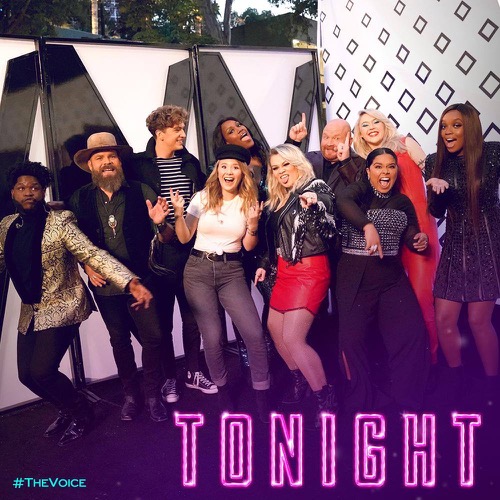 Tonight on NBC’s Emmy Award-winning musical competition The Voice airs with an all-new Wednesday, December 5, 2017, season 13 episode 23 and we have your The Voice recap right below.  On tonight’s The Voice season 13 episode 23, “Live Top 10 Eliminations” as per the NBC synopsis, “A contestant is eliminated.”

The Voice begins tonight with Carson Daly announcing the results are in and two artists will be going home, introducing coaches, Miley Cyrus, Jennifer Hudson and Blake Shelton. Adam Levine joins him on stage, kisses him on the cheek before joining the other coaches in their seats. For the first time this season, the bottom three will sing for America’s Instant Save hoping to advance to next week’s semi finals. Portugal. The Man performs “Feel It Still” as we kick the night off.

This week is all about special songs that inspire the artists, so the Top 10 had a chance to sit down with their coaches and ask them about the moments that changed their lives. Blake Shelton says when his first album went gold that was when he felt he made it and could live at least two years off of that. Jennifer Hudson reveals when she decided to leave home, that was when everything started to happen for her; when she stepped out of the pattern of what life was before that.

Adam Levine shares that when he first heard his song on the radio, “Harder to Breath” it was like ‘here we go’ and that was THE album. Adam Cunningham admits he bought the album back then but Addison Agen says she was only 1 when that came out; Adam takes a deep breath and says that one hurt! Miley says the first songs she wrote were “Pink Isn’t a Color” and out of anger because her mother grounded her she wrote one called “Evil Mother in the Dead of the Night!” Blake says if country music didn’t work out for him, he’d probably be homeless as he didn’t really have a Plan B. Jennifer tells her artists that after this, their lives will never be the same.

Carson welcomes the Top 10 to the stage, announcing that for the first time this season they had 4 artists who hit the Top 10 in the iTunes chart and we will have to see if that was enough to stick around. Brooke Simpson shares that she will take every piece of advice Miley gave her, whether it was about life or music. She reminded her to always trust herself and think outside of the box; she thanks her for trusting in her. Keisha Renee feels Blake is amazing because of who he is and if anything, the one thing she learned is to stay true to herself because if it ain’t broke – don’t fix it!

Carson has the names of the first two who are moving on to the Top 8. America has saved from Brooke Simpson from Team Miley. Miley steps down from her seat and says “Duh!” as Brooke tells her she loves her. America has also saved Addison Agen from Team Adam.

As we return from commercial, the remaining eight artists are called back as Carson is ready to announce the next two artists. Shi’Ann feels Jennifer helped her grow as a person and come out of her shell; making sing better as she took the notes she gave her. Red Marlow sang a song last night about growing up; he takes a moment thanks the small town he grew up in and the town he currently lives in for their support.

America has saved Keisha Renee from Team Blake. He shouts that she did it, but she tells him “WE” did it! Carson continues and says America also saved Noah Mac from Team Jennifer; all four coaches are now represented in the Top 8.

Reba McIntyre announces that the winner of Season 13 of the Voice will join Alisan (Season 10), Chris (season 2), Mary Sarah (Season 10), Matt (Season 7) and Matthew (Season 5) on stage every night, live, next Spring at the Voice Neon Dreams, just down the road in Las Vegas. After the announcement, we are given an update on Season 12 winner Chris Blue’s life, who has gotten married and sign a record. Proudly performing and selling out a 3-night concert in less than 10 minutes.

The remaining six artists return to the stage, Davon Fleming is thrilled about the comments from last night. He is thankful for the support and wisdom from them. Chloe Kohanski admits she doesn’t like to look too far ahead and definitely doesn’t like comparisons, feeling it is sick and cool that people are still into rock music.

America has saved Chloe Kohanski from Team Blake and we will see her next week in the semi-finals. America has also saved Adam Cunningham from Team Adam. Adam Levine jumps up and hugs him in the stage as they move one step closer to winning it all.

As we return from break, The Voice Season 4 winner, Danielle Bradbery performs her new song “Worth It”. After her performance, she quickly leaves the stage so the final four can return. Ashland says she would love to show America her softer side if she survives until next week. Carson says one of them is save, and the other three will have to perform for the instant save. America has saved Red Marlow from Team Blake, which means it is a clean sweep for Team Blake and now Ashland Craft, Shi’Ann Jones and Davon Fleming will need to perform songs they have hand selected and unfortunately, two of them will be going home.

Ashland Craft is up first, she will be singing “Tonight, I Wanna Cry” by Keith Urban. Miley Cyrus talks about all her performances, saying she has been here long before the live performances and has done and shown so much. She wants everyone to take that into consideration. She says no matter what she stands for and honors her decision to bring her to the live shows as she deserves it. She wants Ashland to keep believing that she is the country from the bottom of her soul.

Shi’Ann performs next, singing “At Last” by Etta James. Jennifer Hudson wants everyone to know she is the youngest in the competition and therefore she is the future and has great potential and is like a sponge. She wants to see her continue, so they can all be a part of the star that she is.

One more performance before the “instant save” lines are open. Davon Fleming comes on stage and sings “Ain’t No Way” by Aretha Franklin. It’s a tough night for Jennifer, she says a vocalist like him doesn’t deserve to be in the bottom of anything. She hopes to see him continue in the competition and hopes everyone can see that but he is a star regardless. The 3 remaining artists return to the stage, as Carson explains how to save one of the three artists in the next five minutes; after the break we shall know who has been saved and will be in the Top 8.

During commercials, Davon Fleming is clearly in the lead at 49%, while Ashland Craft remains at 35% and Shi’Ann Jones is trailing at 16%. The Voice returns, Carson welcomes everyone back as the final three hold hands; the numbers are removed as Ashland says if she leaves she is thankful to Miley for pushing her for being the best she can be. Shi’Ann thanks Jennifer for being there for her and taking the time out of her day to support her and her dream. Davon thanks Jennifer for investing him, outside of music and in him as a person. He appreciates her.

Miley loved the most, watching Ashland’s confidence level grow from the blinds until now is a world of difference, as she does it with ease and grace. Miley says she is honored to have the country artist in her. Jennifer tells Davon that regardless of what happens, think of the opportunity he has been given and where his talent has gotten him; she reminds him that she was eliminated 7th but that didn’t mean it was over. Only he gets to decide when it is over! She says that goes for Shi’Ann too, she tells her as long as she holds on to her dreams and aspirations, no one can take their talent nor dream. Do it because they love it, not for the attention or the praise, nor the accolades. Love who you are.

Carson announces that America has instantly saved Davon Fleming from Team Jennifer. Tune in for the Live Top 8 Finals on Monday!