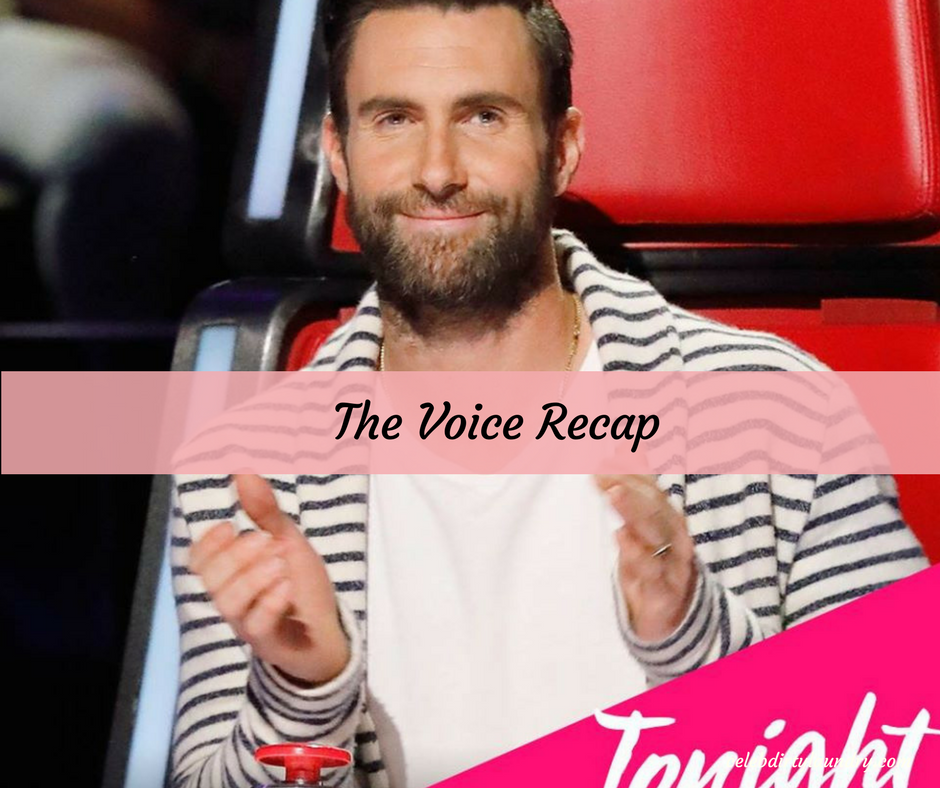 Tonight on NBC’s Emmy Award-winning musical competition The Voice premieres with an all new Thursday, March 13, 2017, season 12 episode 6 and we have your The Voice recap right below.  On tonight’s The Voice season 12 episode 6 episode as per the NBC synopsis, “The “blind auditions continue for the final week.”

The final week of blind auditions starts with the judges bantering and the first artist up is:

Kenny P is 30 years old and lives in a 280 square foot tiny home in Nashville with his wife and two dogs. He has been in bands all of his life and plays six nights a week. He sings Hello It’s Me by Todd Rundgen. Gwen turns her chair around and Kenny’s family celebrates. Right at the end of the song Blake also turns around. Blake starts by insulting Adam and his hambergerler outfit but tells Kenny he wants to see the best things happen for him. Kenny decided to work with Gwen and Blake can’t believe it. Alicia asks who would pick Blake over Gwen? Just look at her!

Enid is 25 years old and is from Florida. She is very nervous about the audition and doesn’t know what to do with her hands while she sings. Enid works as a nurse’s assistant with children and sings in a Reggie/Blues/Funk/Rock band called Ragged Old Souls. She was made fun a lot growing up and used that time to write songs. Her fiancé is her rock and truly believes in her. She sings All I Ask. At the very last second Blake turns around and runs on stage to hug Enid. He can’t believe her range. Adam says he cheated but Gwen tells them all it was fair. Alicia offers her encouragement and good wishes for the future.

RJ lives in Chicago and is 18 years old. Right out of high school he started working at Guitar Center and all of his family members can sing. His older brother was killed in 2009 and his death motivated RJ to pursue his dreams. At 15 RJ started performing and he wants to light up the world with his music. RJ’s mom is so proud of his hard work. RJ sings Purpose by Justin Bieber. RJ’s goal to is make his family proud of him. Adam turns within the first 5 seconds of the song. Alicia is the next coach to turn her chair around. It is a battle between Adam and Alicia. Adam argues that RJ’s voice is so special. Gwen comments on RJ’s spirit. Alicia tells RJ that his voice made her feel things and she has been waiting for someone special. He is it. Blake puts in a good word for Alicia. Alicia calls RJ a beautiful black man and he is loving it. RJ tells Adam he loved him but he has to pick Alicia.

Adam has not found an artist for his team yet tonight.

Austin is a 27-year-old from Tennessee. He is a coffee shop manager by day and by night a family man. He started in music when he was 3 and he hated it at first but grew to love it. He sings in church now and sings Alison for the coaches. None of the judges turn around but all have words of encouragement for him. Blake feels like Austin’s performance was “too chill”. He needed to hear a sense of urgency that wasn’t there. Adam felt he was just too subdued. The judges are getting down to the last few openings on their teams and are become more picky and aware of the holes they need to fill.

TSoul is a 29-year-old from Virginia. He sang with his gospel choir in college and has made many viral videos on YouTube. He has traveled around the world singing for the last six years. He really wants to work with Alicia Keys. Adam and Blake turn almost immediately after the first note of Take Me To The River is out of TSoul’s mouth. Neither of the female coaches turn around. Adam is up and out of his chair before Blake can say a word. Adam begs TSoul to come home. Alicia plugs Adam while Gwen says a lot of nice things for Blake. TSoul picks Blake and no one can believe it. Adam tells TSoul he broke his heart. Blake can’t help but gloat.

Hanna’s dad signed her up for the audition as a surprise. She is 15 years old and from California. She is the oldest of four and tries to be a role model for her siblings. Hanna teaches piano but her true passion is singing and song writing. She hopes to learn and become more developed as an artist. She performs Blank Spaces by Taylor Swift for the coaches. Adam turns around followed by Blake and then Gwen. Adams says he will claw and fight to get Hanna on his team. She has what it takes to win the whole thing. Gwen tells Hanna she is exactly what she is looking for and she can take her all the way. Blake comments on Hanna’s charisma and says her smile lights up the whole room. Hanna will be on Adam’s team.

26 year old Casey Jamerson from Indiana grew up as an athlete. She played every sport possible and loved it but couldn’t deny her passion for music. She was cast in the musical Bring It On: The Musical on Broadway. After that role she decided she had to dedicate herself to Rock and Roll. She sings Shadows of the Night by Pat Benator and hopes to work with Gwen. None of the coaches turn around. Gwen apologizes for not turn around. Alicia encourages her to come back.

20-year-old Hunter is from Louisiana. He and his wife lost everything in the recent flooding. They had just been married two months and had to move in with his parents as they try to figure out their next steps. Hunter has never performed anywhere but church and is very nervous. He sings Carry On and Gwen turns around followed by Alicia. Hunter comments on how polite Gwen and Alicia are to each other as they argue to get Hunter on their own team. Alicia thinks he will bring something important to her team that she is missing. Gwen thinks they could be great together. Alicia doesn’t want Gwen to have the last word. He loves them both but goes to Team Alicia.

Nala is 17 years old and from Florida. Her mom started entering her in talents shows since she was a young girl. She was nervous at first but loves performing now. She loves to sing and dance. Nala is a senior in high school and the Voice is the most exciting day of her life. She performs Send My Love and both Adam and Gwen turn their chairs. Gwen believes that Nala was singing right to her and compliments her on showing all sides of her voice. Adam is thrilled when Nala chooses his team. Gwen calls Adam stupid.

Sammie is 24 years old and from Texas. She recorded a single and started singing at weddings after college. She has her own company now and is also planning her own wedding. She came out to her parents while she was in high school and they were supportive. Her fiancée is very supportive of her singing. Dangerous Woman is Sammie’s choice to sing for the coaches. Gwen turns around first and is the only one. Alicia comments on Sammie’s bluesy emotional vibe. Gwen comments on the truth in Sammie’s voice.

32 year old Valerie is from Texas. She plays County American music and graduated from Berkley School of Music. She has worked in a variety of job but after meeting her boyfriend decided to start a band. They are Val and The Southern Line and travel the country playing their music. She sings Ring of Fire and all four of the judges turn their chairs and it is an all-out fight to get Val on their team. Alicia tells Val her voice is beautiful. Adam tells Val she is the most well rounded singer they have seen in a long time. Gwen kisses Val. Val picks Blake and he meets her family. Gwen is not happy!