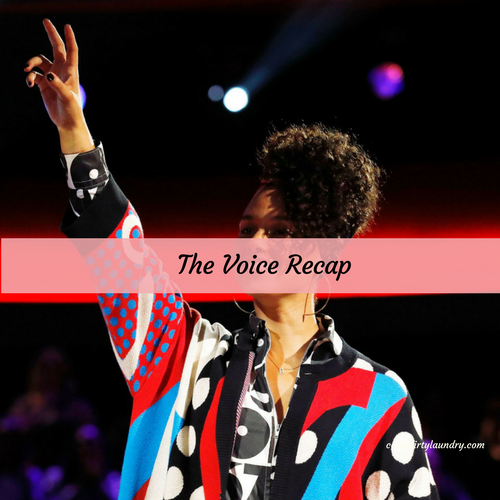 Tonight on NBC’s Emmy Award-winning musical competition The Voice premieres with an all new Thursday, March 14, 2017, season 12 episode 7 and we have your The Voice recap right below.  On tonight’s The Voice season 12 episode 7 episode as per the NBC synopsis, “The blind auditions conclude as the vocalists compete for the coaches Alicia Keys, Adam Levine, Blake Shelton and Gwen Stefani.”

Alicia needs two artists to complete her team. The other three coaches only need one more singer each to have a full roster. John Legend, Celine Dion, DJ Khaled and Luke Bryan will be the advisors next week. Tonight is the last night of the blind auditions and the completion is fierce.

A native of North Caroline, Vanessa is 31 years old and has been performing since she was 3 years old. She was raised by her grandmother and music was a part of her life always. She is classically trained but is drawn to R&B and Hip/Hop. She was recently performing on cruise ships and hopes the Voice can take her career to the next level. She sings Don’t Let Me Down and the judges love it. Gwen and Alicia turn simultaneously followed by Blake. Adam starts by saying he is a dummy from not turning around. Blake says he is probably not the guy she thought she wanted to work with but he was so impressed with her voice. He has something to offer that the girls just don’t have. Alicia thinks she can help Vanessa discover more about herself then the other two coaches. Gwen was impressed by Vanessa strength but Vanessa picks Alicia.

Dawson is 17 years old and grew up in New Jersey. He is an only child and was home schooled his whole life. In the last year his family lost their home to a fire. All of Dawson’s musical equipment was lost in the fire but through the generosity of their church and friends everything was replaced. They are so thankful that no one was hurt. Dawson sings Happiness by NEEDTOBREATHE. Blake is the only coach to turn around and Dawson completes his Team. Gwen was impressed with his song choice. All the coaches comment on the beauty of Dawson’s voice.

Jozy is a North Dakota native and is 26 years old. He dad was a professional basketball player for the Chicago Bulls. She also played basketball but as a junior in high school she started performing. Her dream job is to be a professional singer and for her blind audition she performs American Woman. Adam and Gwen both turn their chairs and Adam gets mad at Gwen for turning. He says he will fight her. Blake interrupts Adam to make a case for Gwen. Gwen wants to help Jozy find herself. She choices Gwen and now her team is complete.

Stephen is 32 years old and is from a small town in Illinois. Gwen’s album was the first album he ever bought. He is a full time musician but it hard making a living in his small town. He sings Three Little Birds by Bob Marley for the judges. He doesn’t have a plan B if he doesn’t make it on the Voice. No one turns around. All of the coaches encourage him to come back.

Sheena is a native of Florida. She is 32 years old and sings Baby Girl by Sugarland. She has been in the rock band Fellow Bliss for almost 10 years. She and her wife have been married for just over a year and she hopes to be able to showcase who she is during her blind audition. Adam turns around and she is the final member to round out his team.

Meshale Akopain, Jacob Westfall, and Lyndsey Highlander all sing but Alicia does not pick any of them for her team.

Chris is 26 years old and lives in Tennessee. He is the youngest of 7 children and they are all singers. The family put a band together and called themselves the Blue Brothers and played at churches. His finance almost died recently due to cancer and he promised himself if she pulled through he would make her his wife and try out for the Voice. He is nervous because this is the first time he has stepped out on his own. He knows there may only be one spot left but he is determined to make it his own. Chris sings Tracks of My Tears. Alicia turns and is thrilled to have Chris on her team. His voice is amazing and the rest of the judges as very jealous that they missed out on having Chris on their team.