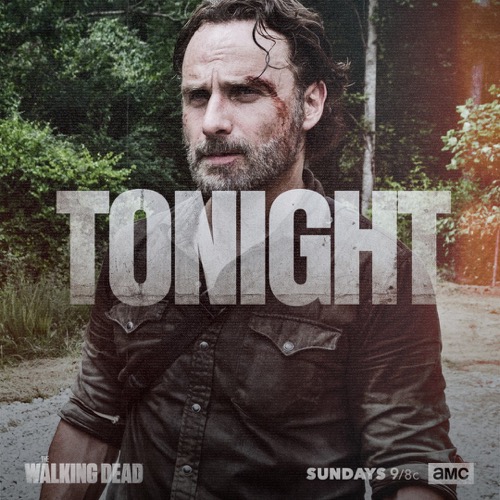 Tonight on AMC our favorite show The Walking Dead airs on an all-new Sunday,  November 12, 2017, episode and we have your The Walking Dead recap below.  On tonight’s The Walking Dead Season 8 episode 4 called,  “Some Guy,” as per the AMC synopsis, “A new weapon in the Savior’s arsenal proves to be a giant hurdle, as fighting continues between Rick’s forces and those of the Saviors.”

Ezekiel (Khary Payton) fixes his hair and prepares himself for the day, places two red feathers in his hair, shuts off the light and leaves the room. Others prepare themselves and say “goodbye” to their loved ones as Ezekiel watches from above; he soon joins them, as they part a path for him and Shiva to walk, him and Carol (Melissa McBride) lead together. Ezekiel reassures a young boy named Henry that he should not be afraid for he is brave.

Ezekiel prepares them, saying they pray for no rain in an overcast sky – and he smiles. They will fight and they will bleed – and he will smile. They shall face men, thrown in by circumstance or by their own thrills – we shall end them all. It is our charge as is our sorrow, and yet I smile. We will leave our loved one to travel a dangerous road. Flushing out peace with war, for we will find glory, from the rock of struggle today. Trust the King, we will win. I rejoice this day, to this day we are joined and of a singular heart and mouth. WE ARE ONE!!

People with armor seem to be lying dead all over the place, as Ezekiel emerges from several dead corpses. He looks around at the silos where the shooting came from, then rushes to his friends, and finds each and every one of them dead. He screams out in agony, realizing the magnitude of his loss, until one by one they begin to return as walkers. Ezekiel attempts to get away, but his leg is injured.

Carol is inside the building as the Saviors are ordering everyone to get their butts in gear. Suddenly, as they grab their gear and ammo, Carol shoots them through the ceiling, more people rush in, they are told to let her go and to grab the guns. Ezekiel is taken captive, just as more walkers come close to him. He takes Ezekiel’s blade, as he learns they are going to the Sanctuary and Ezekiel can be his way in. Carol hears that the Saviors are headed to the Sanctuary as well; he mocks Ezekiel and all those people he convinced to be his sheep, joking that he got them all killed and they are still all following him. He says Ezekiel is just some meaningless man in a costume. Carol begins shooting at the men and hides behind a truck bu the stairs, unsure of what to do next.

After the shooting stops, Carol raiser her head, but they begin to fire at her again. When he is unable to break the lock on the gate, he kicks Ezekiel down after asking for his knife saying the death is upon them. He informs Ezekiel that Negan wanted him, Rick Grimes (Andrew Lincoln) and Maggie, the widow (Lauren Cohan), wired to the Sanctuary fence, but he says Ezekiel’s head on a pike will do just fine. Ezekiel lifts his chin, waiting for the knife to slice him when Ezekiel’s guard slices him in half, rescuing the King.

The gunfire stops, as Carol know she is surrounded. She promises to tell where the others are if they let her live. She comes out, unarmed as Jerry helps Ezekiel, still calling him His Majesty. Carol begs that they won’t tell her people she ratted them out. She grabs the man by the throat with her knife, she opens the gate, letting the walkers in as Jerry breaks his ax trying to break their side open. He tells his Majesty to get behind him, but Ezekiel refuses. The walkers invade the compound, taking down the Saviors one at a time.

Jerry thanks Majesty for being such a cool dude as they fight for their lives against the herd of walkers. Carol tells Yago (Charles Halford) and his men that they need to end this. He says she can leave, but she says they aren’t leaving with all that ammo. She is caught between talking to Yago and saving Ezekiel, who she can see is losing the battle on the other side of the fence.

Carol and Ezekiel are in the Kingdom, as she questions him about fighting before this. He says he has trained for a very long time, and practices on end and is ready to become what he must. He says he was a zookeeper who was meek, explaining how he jumped into a wounded 500lb tiger enclosure to help her. He says he is finally ready to be a hero, asking Carol if things were easier for her, or was she always this strong and brave. She admits she decided to like him, but life decided some of those things too.

At the fence, Ezekiel watches at the walkers around him drop like flies. The Saviors escaped with the guns but Carol says there is nothing they could do about it. Jerry helps to carry Ezekiel, he says they need to get word to Rick that the guns are going to the Sanctuary; Carol hears a sound and smiles saying they aren’t getting those guns to the Sanctuary; realizing it was Daryl’s (Norman Reedus) motorcycle and Rick’s truck that were following the truck with the guns and ammo.

They open the back of the truck and quickly Daryl skids off the road but Rick doesn’t give up chasing them. Yago has a tough time avoiding walkers on the road, causing injury to his gunner in the back. Rick uses his truck to block Daryl as he shoots at Yago and the truck. He manages to jump into the truck and stab Yago but the truck goes over the guardrail and into the forest below. Rick is already walking back up, saying they have the gun, but Daryl tells him he looks like sh*t. Rick wants to know if the guy is alive.

Carol walks with Jerry and Ezekiel. Ezekiel sits down on the tracks saying they need to leave him as he is slowing them down; Carol tells him he doesn’t get to do that, and they are almost out of ammo. They come upon a swampy area where walkers are everywhere; when Ezekiel protests, she tells Jerry to lower him down to her. Jerry refuses to leave him but finally, Ezekiel snaps, saying he isn’t his king, he is nothing and orders him to look at the walkers, saying he is nothing, and just “some guy.” Shiva arrives at the last second and fights the walkers to save Ezekiel, but gets eaten by them as a distraught Ezekiel looks on.

The three return to the Kingdom, where people gather to see them. Ezekiel puts his hand briefly on the boy’s shoulder, but without words, goes off to his home.