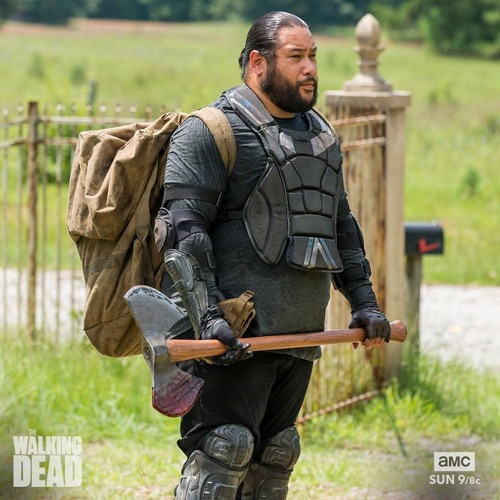 Tonight on AMC our favorite show The Walking Dead airs with an all-new Sunday,  February 19, 2017, episode and we have your The Walking Dead recap below.  On tonight’s The Walking Dead Season 7 episode 10 called, “New Best Friends,” as per the AMC synopsis, “On the search for a missing Alexandrian, Rick (Andrew Lincoln) and his group encounter a mysterious collective, whose inhabitants are unlike any they have come across.”

Soldiers from the kingdom I’m waiting to meet up with the saviors. They arrive. Jerry opens the trunk to show they’re offering. Gavin says it looks like but the king reassures him that they have met their obligations. Richard gets into an argument with one of the saviors, guns are drawn. The king tells Richard to give up his gun. One of the saviors hits him. Morgan Morgan intervenes by hitting him with his stick. Everybody re- gains control but the leader of the saviors small groups threatens the group. The saviors leave, before they go they take Morgan’s stick with them. They all head back to the kingdom. Morgan wants to talk to Daryl.

Daryl is disappointed with Morgan and his submissive behavior. Richard practices with his bow and arrow when Daryl shows up – he offers him a chance to shoot, to practice because he needs Daryl’s help.

Richard and Daryl head out on foot with weapons. Richard wants to hide out on the road the saviors travel and shoot them before bombing them. His plan is to lead the saviors to the cabin where Carol lives – if they hurt her Ezekiel will finally react. It isn’t until he says that the woman is ballsy and tough that Daryl figures out he is describing Carol. He asks Richard what her name is and he confirms what Daryl believed. Daryl isn’t going along with his plan now that he knows it is Carol. Suddenly, they see the saviors traveling down the road and in attempt to save Carol’s life Daryl attacks Richard to keep him from taking aim at the saviors. They fight while the saviors pass by in a car. They don’t see them. Before grabbing his bag to leave Daryl threatens Richard – if anything happens to Carol he will kill him.

An ariel view shows what looks like a junkyard. But doors open and dozens pour out. In the crowd is Rick and the gang. They look around and take in this strange community. The large group of people form a circle around them. The leader steps up to Rick – we owe your lives, do you want to buy them back? Rick wants to see Gabriel first and then they can talk. Rick explains that they are owned by the saviors and if this group hurts them, the saviors will be looking for them. Rick wants this group to join them and fight the saviors. The female leader says no, they take Gabriel away. A fight breaks out. Gabriel grabs one of the leaders. He has her at knife point. Gabriel tells all of them about the saviors, how they have food, cars, has, ect. They decide to listen more. They bring Rick somewhere to meet someone. Michonne is nervous. He tells her it is okay.

Rick talks to the female leader who says things are changing. Maybe they are ready for a change. After giving him a speech from atop all of the junk, she pushes him.

Michonne runs to find Rick with the others. He tells her he is all right. He is in a circular area where a walker comes at him, a walker with spikes coming out of it. Rick pushes him away and gets stabbed. He kicks ad is stabbed again. Rick pulls at the trash all around. It collapses on the walker. He finds a sharp instrument and kills the walker. He yells to the leader – “do you believe us now?” She throws a rope down. He pulls himself up. She looks him over. She wants guns and then they will fight the saviors. They barter – she wants ½ he offers 1/3. After some more back and forth, they shake. Rick asks her what her name is – it’s Jadese, she answers while walking away. Rick tells the others they have a deal, they all smile.

Carol comes out of the cabin. Ezekiel and his men show up on her door. They brought cobbler. She takes it and tells them to go. They goes back inside. There is a knock. She opens the door. Its Daryl. She cries, they don’t talk, just stare each other and hug. “Why did you go,” Daryl asks her. Carol tells him she had to.

Gabriel tells Rick that he was taken. He was happy that Rick smiled at him and didn’t assume the worst. He tells him that things are going to be bad before they get better. Gabriel wants to know why Rick smiled. Rick has learned that enemies can become friends. They all pack up the car while talking about how they will get the guns. Rick asks Tara if she knows where – she has been the furthest. Before they leave, Rick grabs a metal cat out of the junkyard and gives it Michonne – it is to replace the one she lost.

Carol sits by the fire. She tells Daryl that she can’t lose anyone, she can’t kill anymore. She would be forced to kill though and then there wouldn’t be anything left of her after that. Carol asks about the saviors – did they come, did anyone get hurt? Daryl tells her that the y came and that everyone is all right. She cries. Daryl wants to eat. They sit down to eat. Daryl asks about Ezekiel. Carol says he is okay. Daryl leaves but before he goes he hugs her. He tells her to watch out for herself.

Daryl heads back to the kingdom. He visits with the pet tiger. Morgan comes in. Daryl tells him he found Carol. Morgan admits that he knew, but he promised her he wouldn’t tell anyone. Daryl tells him that he needs to get the king to agree. Morgan says he can’t. In the morning, Daryl leaves to go back to Hilltop.