The Young and the Restless Spoilers: Billy’s Discovery Ends Lane’s Marriage – Cane Only Has Himself To Blame For Nasty Divorce 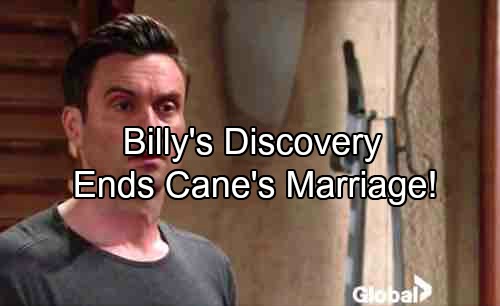 The Young and the Restless spoilers tease Billy’s (Jason Thompson) realization that Cane (Daniel Goddard) killed the DARE commercial shoot will cause major fallout. The moment Lily (Christel Khalil) learns the entire truth Lane, as all fans suspected, will be over.

Billy and Cane have detested each other for awhile. It’s a form of dysfunctional family rivalry. While Jill (Jess Walton) once was fooled into believing that Cane might be her biological child, he wasn’t. So Billy was never his brother.

However, Colin’s (Tristan Atkinson) marriage to Jill forced Cane and Billy to be stepbrothers. Viewers recall the memorable incident at the Chancellor mansion where both guys slugged it out. Yes, they truly didn’t like each other before more current events developed.

Jill gathered her boys and Victoria (Amelia Heinle) at Brash and Sassy last year. Later Vickie bought the former Newman division that she once founded, edging out Cane’s hopes to be the owner. The tense trio never found a way to co-exist, though if Vickie and Billy were honest they would acknowledge that Cane’s herculean efforts carried them to sound financial footing.

So Cane allowed his life to go offtrack. Tokyo and Juliet (Laur Allen) had nothing to do with Billy.

Then Cane decided he didn’t want Billy’s Professional Hockey League tie-in commercial to work. He paid a creep named Jesse to doctor digital footage, which made it look like Billy wanted two hockey players to bet on the Final. 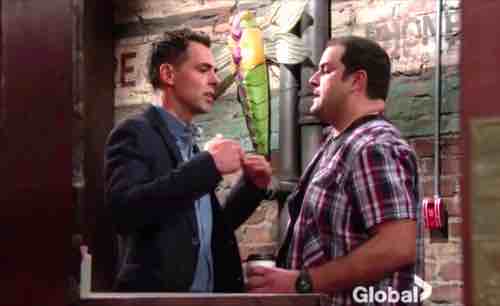 Jesse arrives in Genoa City months later and demands a blackmail payment. Cane won’t oblige, though he considered it. And then, on the same day, Billy saw Jesse at Crimson Lights.

To say that Cane has acted like a coward would defame lesser losers everywhere. No, this guy has betrayed his marriage vows and got a woman who wasn’t his wife pregnant. Juliet is a peach herself, as she lied about Cane having forced her to be with him sexually in order to secure a job at Brash and Sassy in order to win a settlement pay day.

Cane put the company he used to work for into serious legal jeopardy, but not by coercing Juliet into bed. His binge drinking set up a scenario that never should have happened. That was the dumb mistake.

This character (both fictionally and as a jab) put his family’s future in peril by purposely choosing to attack Billy due to petty jealousy. Cane didn’t consider collateral damage.

Cane was reckless and totally wrong and that’s why he only has himself to blame. Now, he’ll offer pathetic excuses to Lily and the kids as well. What a bum. CDL is a leading source for everything linked to The Young and the Restless. Check back regularly for Y&R spoilers and news! Sign up for our newsletter by clicking here and get the latest breaking soap news!

We’re turning up the HEAT next week on #YR! 🔥🔥🔥🔥 pic.twitter.com/wzMTroCXvx