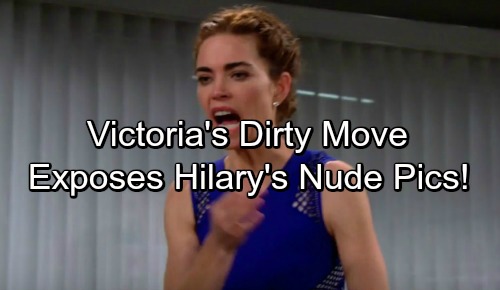 The Young and the Restless (Y&R) spoilers tease that sex ring scandal will lead to some terrible consequences. Abby (Melissa Ordway) should get the worst of it. She’ll have to deal with the fact that her boyfriend is a sleazy criminal, but that’s just the tip of the iceberg. Because Abby trusted Zack (Ryan Ashton), she’s put her family members at risk.

Next week, The Young and the Restless spoilers state that Scott (Daniel Hall) will make a shocking connection. It sounds like he’s getting closer to the truth. Zack’s deception will obviously be exposed sooner or later. Victor (Eric Braeden) will be furious when he discovers Newman Enterprises has been facilitating a sex ring.

To make matters worse, vulnerable Brash and Sassy has signed on for damage. They’ve has already been tied to a series of high-profile scandals, including a sexual harassment lawsuit. How’s it going to look if their next one involves a sex ring?! That’s exactly what’s coming thanks to Victoria’s (Amelia Heinle) decision to advertise on the app.

Jack (Peter Bergman) and Hilary (Mishael Morgan) could face some problems of their own. The sex ring storyline could affect them indirectly. There’s a good chance Hilary will indeed become the face of Jabot’s new line like she proposed. That could open Hilary and Jack up to a world of trouble.

Y&R has established that Billy and Victoria are willing to play dirty. There also has to be a reason Hilary is getting this gig. After Brash and Sassy takes another devastating blow, they’ll undoubtedly scramble to save the company. Part of their strategy should involve dragging the competition. They’re doing that anyway, but it’ll be time to up the ante.

Will Hilary’s nude photos come back into play? If Jordan (Darnell Kirkwood) saved a copy of the pics, he could use them to target his ex as well as Jabot. Lily’s (Christel Khalil) job will be jeopardy over at Brash and Sassy, so it’d be the perfect moment to strike.

Billy and Victoria could easily be in on the plan. After all, Victoria warned Hilary to watch her back. Here’s her shot at revenge for the Ben Hochman (Ben Hermes) fiasco. As a bonus, Victoria and Billy could make Jack pay.

Will the sex ring revelation lead to another round of bombshells? Will Hilary face total humiliation? Could Jabot get caught up in their own scandal? We’ll give you updates as other Young and the Restless news comes in. Stay tuned to Y&R and don’t forget to check CDL often for the latest Young and the Restless spoilers, updates and news.