The Young and the Restless Spoilers: Eric Braeden Too Ill to Travel – Forced to Skip Toronto Event 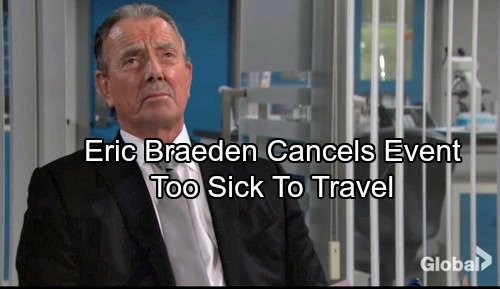 The Young and the Restless (Y&R) spoilers reveal that Eric Braeden (Victor Newman) was going to attend an exciting event in Toronto. Unfortunately, the actor has fallen ill and cannot travel. Find out about his recovery and if the event will be rescheduled.

On Sunday, October 29, Y&R fans were going to line up to get a book signing from soap icon Eric Braedon. As viewers know, he released the book, “I’ll Be Damned: How My Young and Restless Life Led Me to America’s #1 Daytime Drama.” The signing that has been canceled was taking place at Indigo Books in Toronto.

“Thank you all for your kind words inquiries! Can’t make it to Toronto because I caught a bad bug! Hopefully, I’ll come there sometime soon!”

Naturally, fans were concerned about the star of The Young and the Restless.

Spoilers confirm that he will recover. On Twitter, Braeden said that he caught a bug that happened to be going around. On Facebook, he further addressed the illness. He assured fans that he was taking care of himself and would recover soon.

“Thank you all for your kind questions as to my well-being! I’m still full of pee and vinegar, Young AND Restless, but just caught a bad bug which seems to be going around! Thank you for your concern! Love yours, Eric!”

The Young and the Restless spoilers indicate that the “I’ll Be Damned” book signing could be rescheduled. However, no specific plans or dates were confirmed.

“I’ll Be Damned” is Eric Braedon’s autobiography. It landed on both the Publishers Weekly and Canadian best-seller lists. It resulted in rave reviews from both critics and fans.

According to his official website, it does not appear that there are any other book signings scheduled. However, there have been some in the past. There was even a videotaped live signing with the actor. During that event, he answered a lot of questions, including the reasons for him penning the book.

CDL wishes Eric Braeden a quick and thorough recovery hoping he beats his bug in short order. Stay tuned to the CBS soap and check back with CDL for the latest in The Young and the Restless spoilers, updates and news.