The Young and the Restless Spoilers: Jack Pushes Dina to Change Her Will ASAP – Graham Proves He’s An Ice Cold Killer

BY Kinsley Goldman on October 13, 2017 | Comments: one comment
Related : Soap Opera, Spoiler, Television, The Young and the Restless 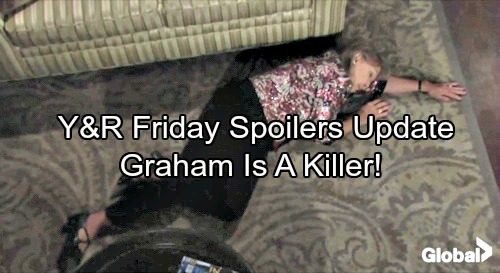 The Young and the Restless (Y&R) spoilers for Friday, October 13, tease that Ashley (Eileen Davidson) and Graham (Max Shippee) will continue their showdown. Graham will feel like he’s the one who’s suffered in all of this. He’ll rant until Ashley sarcastically congratulates him on getting her secret out and manipulating her mother.

Graham will try to convince Dina (Marla Adams) to leave with him, but she’ll insist on staying at the party. Neil (Kristoff St. John) will come forward to lead Graham out. After the bash breaks up, Traci (Beth Maitland) and Abby (Melissa Ordway) will approach Ashley to learn more. Ash will opt for a private conversation with Dina instead. 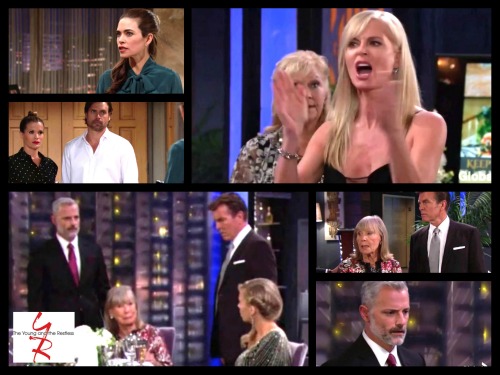 Dina will look devastated as Ashley talks about a piece of her dying tonight. Later, Jack (Peter Bergman) will urge Dina to change her will as soon as possible. Once Graham overhears, he’ll do damage control. Graham will offer an explanation during a chat alone with Dina, but she’ll think he was only worried about money and vengeance.

When Graham’s rage erupts again, Dina will deliver a hard slap. She’ll try to make a phone call, but Graham won’t allow it. The Young and the Restless spoilers state that Dina will suddenly collapse. Graham will consider dialing 911, but he’ll ultimately stand back and gaze at Dina on the floor – refusing to help the dying woman. Later Graham leaves the hotel suite and places a do not disturb sign on the door – this is attempted murder!

At the Abbott mansion, Jack will promise Ashley that their family won’t change a bit. He’ll remind her that she’s always been an Abbott. Biology doesn’t matter here. Y&R spoilers say Abby and Traci will watch as Jack pulls Ashley close. Ash will mention that John (Jerry Douglas) died without knowing her true paternity.

At Phyllis (Gina Tognoni) and Billy’s (Jason Thompson) place, they’ll still be in shock over the night’s events. Billy will confess that it’s strange to think Ashley isn’t his biological sister. He’ll fume about Jack hiding this, but he’ll eventually concede that sometimes it’s best to keep secrets.

Across town, Victoria (Amelia Heinle) will lash out at Nick (Joshua Morrow). She’ll complain about him giving all his money away to spite Victor (Eric Braeden). Chelsea (Melissa Claire Egan) will note that she’s on Nick’s side. They’ll try to make Victoria understand, but she’ll feel like this is ridiculous. After her ears start ringing, Victoria will head out.

Other Young and the Restless spoilers say Mariah (Camryn Grimes) will have an awkward conversation with Tessa (Cait Fairbanks). After Tessa brings takeout to the TV studio, she’ll allude to their unfinished business. Tessa will suggest that they haven’t quite said everything they need to say yet.

Hilary (Mishael Morgan) will walk in before Mariah can open up. Devon (Bryton James) and Neil (Kristoff St. John) will also arrive, but Mariah will send them off to dinner by themselves. Tessa will agree to pick up their chat later. Once they’re alone, Hilary will call Mariah out on her lack of interest in Devon.

It sounds like Hilary’s suspicions are growing. We’ll give you updates as other Y&R news comes in. Stay tuned to the CBS soap and don’t forget to check CDL often for the latest Young and the Restless spoilers, updates and news.