BY Heather Hughes on September 21, 2017 | Comments: one comment
Related : Soap Opera, Spoiler, Television, The Young and the Restless 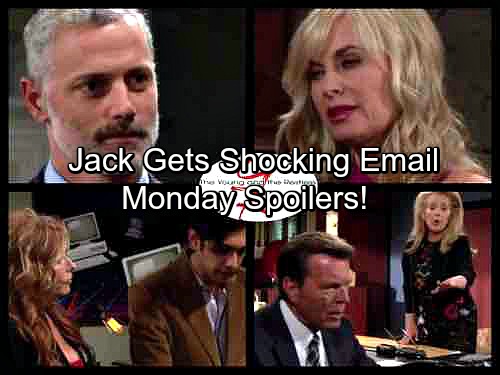 The Young and the Restless (Y&R) spoilers for Monday, September 25, tease that Ashley (Eileen Davidson) will put Graham (Max Shippee) on notice. She’ll declare that she knows what he did and he’s not going to get away with it. Graham will undoubtedly suggest that he has no idea what Ashley’s talking about.

Ash will think Graham should drop the act. She’ll point out that he’s a nothing but a manipulative liar. Y&R spoilers state that Ashley will promise to make Dina (Marla Adams) see that soon enough. She’ll be certain that her mother is going to turn against Graham eventually.

Graham might play it cool or he could toss around a few threats of his own. After all, Dina gave Graham some serious ammunition. She revealed that Ashley isn’t a true Abbott, so Graham can save that secret for a rainy day. There’s a good chance it’ll come in quite handy for blackmail or even revenge.

In the meantime, Ravi (Abhi Sinha) will make a shocking discovery. His been looking into the mole situation and it seems he’s found the culprit – well, at least the culprit’s computer. With Lauren (Tracey E. Bregman) by his side, Ravi will prepare to break the news to Phyllis (Gina Tognoni).

When Ravi struggles to spit it out, Phyllis will grow concerned. She’ll want to know what the issue is. The Young and the Restless spoilers say Phyllis will learn her laptop is the source of the leak. Naturally, she’ll assure Lauren and Ravi that she’s innocent. Phyllis will think there must be some sort of mistake.

Of course, it won’t take long for Lauren and Phyllis to discover the alternative. Phyllis isn’t the rat, but she’s been in bed with one. She may not want to believe Billy (Jason Thompson) could betray her like this, but she’ll have to face the facts sooner or later. Phyllis simply can’t ignore the evidence.

Other Young and the Restless spoilers say Jack (Peter Bergman) will get a puzzling email. When he notices it’s from Victor (Eric Braeden), Jack will wonder what this is all about. Nikki (Melody Thomas Scott) will try to stop Jack from opening it, but it’ll be too late. The stunning contents will leave Jack with more questions.

It sounds like Victor will receive the cabin pictures and pass them on. Jack will ask Nikki if someone is stalking them. He’ll be a bit rattled by all of this, but it’s just the price of dating Victor’s ex. We’ll give you updates as other Y&R details emerge. Stay tuned to the CBS soap and don’t forget to check CDL often for the latest Young and the Restless spoilers, updates and news.