BY Heather Hughes on September 23, 2017 | Comments: one comment
Related : Soap Opera, Spoiler, Television, The Young and the Restless 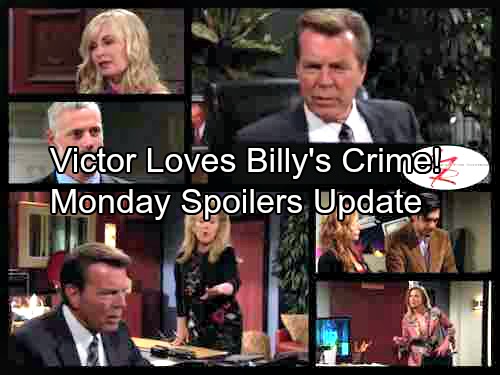 The Young and the Restless (Y&R) spoilers updates for Monday, September 25, tease that Graham (Max Shippee) will tell Dina (Marla Adams) about the evidence he sent to Victor (Eric Braeden). He’ll suggest that Jack (Peter Bergman) needed someone to intervene. Dina will agree that Jack and Nikki’s (Melody Thomas Scott) romance is a disaster. She’ll hope to stop her son’s latest mistake.

Meanwhile, Ashley (Eileen Davidson) will learn that a confidential file was accessed with a Jabot password. She’ll assume Graham is to blame, so she’ll decide to confront him. The Young and the Restless spoilers say Graham will dismiss the notion that he stole any inside info. He’ll offer his laptop so Ashley can have it checked.

Graham will add that he’s fine with the truth coming out. He’ll let Ashley know that he’s capable of much more than she realizes. Since Graham found out Ashley’s secret, that’s definitely true! At Brash and Sassy, Billy (Jason Thompson) and Victoria (Amelia Heinle) will mull over new ideas. The stolen files will reveal a revival of Jabot’s classic line. Brash and Sassy needs something big if they want to compete.

At the ranch, Victor will be stunned when he opens the envelope with Dina’s name on it. He’ll look through the pictures of Jack and Nikki at the cabin. Abby (Melissa Ordway) will confess that she ran into them there. She’ll sense that Victor’s upset, but he’ll act like he doesn’t care what Nikki’s up to.

After Victor sends Nikki a pic on her phone, she’ll arrive seeking answers. Nikki will guess that Victor paid someone to photograph them, but he’ll deny it. When Nikki looks at the envelope, she’ll determine that it’s Dina who needs to be reprimanded.

Later, Y&R spoilers say Jack (Peter Bergman) will open a surprising email from Victor. He’ll tell Nikki that someone’s stalking them, but she’ll admit she already knows. Once Nikki explains the situation, Jack will prepare to give Dina an earful.

Back at Brash and Sassy, Victor will show up to see Victoria. After overhearing part of a conversation, he’ll learn Billy committed a crime for the sake of the company. Victor wants to take down Jack just as much as Billy does, so he’ll be willing to help if need be. Victoria should really keep this destructive backup plan in mind.

At Jabot, The Young and the Restless spoilers say Ravi will discover another problem. He’ll call Lauren (Tracey E. Bregman) over and Phyllis (Gina Tognoni) will eventually join them. When Ravi asks to examine Phyllis’ laptop, she won’t understand what’s going on.

Billy’s sneaky actions are about to catch up with him. The mole is actually a rat! We’ll give you updates as other Y&R news comes in. Stick with the CBS soap and don’t forget to check CDL often for the latest Young and the Restless spoilers, updates and news.