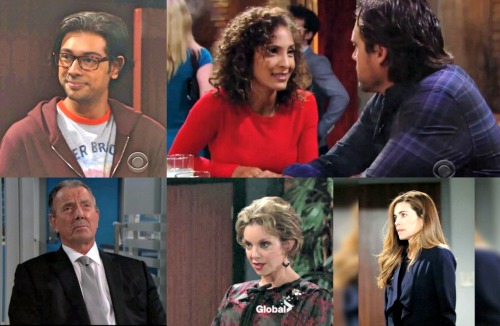 The Young and the Restless (Y&R) spoilers tease that some surprising couples could be in the works. The show has some shockers store for us over the next few months. Y&R’s new head writer, Mal Young, plans to inject some excitement into Genoa City. Offering some new pairings is a great way to achieve that. Here are three unexpected couples that could shake things up.

Lily (Christel Khalil) and Nick (Joshua Morrow) haven’t really been in each other’s orbit lately, but that could all change soon. After Tuesday’s somewhat flirty scenes, something could start to shift. Many Y&R viewers are wondering if a new couple is brewing. That might be a decent idea!

Nick and Chelsea (Melissa Claire Egan) are OK, but there’s not much of a spark going on. It’s tough to buy bland Nick as Chelsea’s love interest when exciting Adam (Justin Hartley) was her last one. Chelsea works best with somebody who can bring out her scheming side and force her to live on the edge of danger.

Lily, on the other hand, desperately needs someone calm and supportive right now. Nick’s stability could be a good thing for her. The Young and the Restless fans will recall that Nick and Lily were once paired up for a fantasy episode. Perhaps the show liked what they saw and decided to make them a real couple.

Victoria (Amelia Heinle) isn’t exactly herself lately, but a recent scene with Ravi (Abhi Sinha) was still intriguing. Her comments indicated some interest in what might’ve been. Mal Young seems to like Billy (Jason Thompson) and Phyllis (Gina Tognoni) together, so maybe he intends to put Victoria with someone else. Ravi might be a fun option to try.

Ashley (Eileen Davidson) and Ravi have been pleasant enough so far, but are they really a long-term couple? It’s difficult to imagine Ashley marrying Ravi. They both went into this knowing it probably wasn’t meant to last. If Ravi gets to stick around, perhaps Y&R will push his character toward Victoria.

The Young and the Restless spoilers state that Gloria (Judith Chapman) will face some serious drama. Secrets from Gloria’s past will leave her in hot water next week. Meanwhile, Victor (Eric Braeden) will manage to stir up trouble with Nick again. If he keeps making moves against his family, Nikki (Melody Thomas Scott) won’t be taking him back anytime soon.

Gloria and Victor recently enjoyed some drinks together. Will Y&R let these two become an item? Gloria doesn’t approve of Nikki’s relationship with Jack (Peter Bergman), so she might as well make her rival jealous with Victor. As a bonus, maybe Victor can help Gloria out of whatever jam she ends up in.