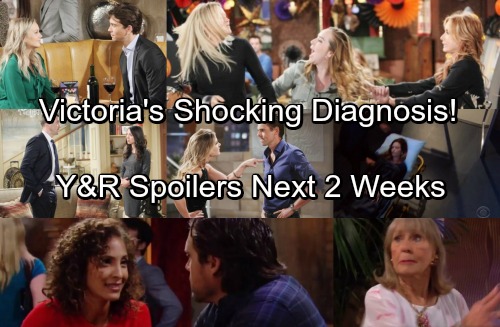 The Young and the Restless (Y&R) spoilers for the next two weeks tease that major drama is looming in Genoa City. The week of October 23-27 will bring some tough moments for Billy (Jason Thompson). After Phyllis (Gina Tognoni) confronts him about his deception, Billy will fight for his relationship. He’ll beg for forgiveness and offer excuses, but Phyllis won’t back down, in fact she’ll physically assault him and toss him out with his clothes.

Meanwhile, Scott (Daniel Hall) will work hard to identify the shell company that’s backing the sex ring. What he learns should leave him fearful. It looks like the jig is finally up for Zack (Ryan Ashton). Later, Scott will find himself in a dangerous situation. Y&R spoilers hint that he’ll get caught in a bloody battle. 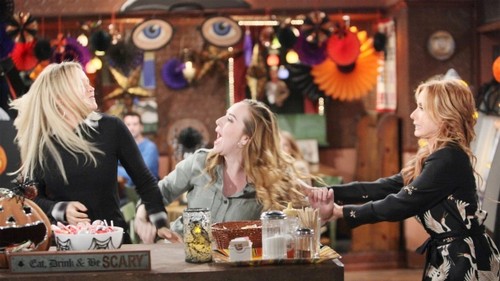 Lauren (Tracey E. Bregman) won’t be pleased when she realizes Scott’s in trouble. She’ll blame Sharon (Sharon Case) for roping Scott into this mess. The Young and the Restless spoilers say Mariah (Camryn Grimes) will have to break up their physical confrontation. She’ll send Sharon and Lauren to their corners, but the tension won’t be resolved anytime soon.

Zack and Abby’s romance will obviously be derailed as well. Since Zack has proven perilous around women, things aren’t looking good. Abby may be on the receiving end of Zack’s wrath. Will her life be on the line? Scott might have to save Abby if she gets in over her head.

Elsewhere, Ashley (Eileen Davidson) and Jack (Peter Bergman) will get stunning news. Will Dina (Marla Adams) be able to reach out? The week of October 30-November 3 will deliver another round of clashing. It seems Graham (Max Shippee) will drive Jack to his breaking point. Jack will find the Abbotts’ enemy and give him a stern warning about who he’s dealing with.

In the meantime, we’ll see the aftermath of Victoria’s (Amelia Heinle) frightening interview on The Hilary Hour. She’ll get a shocking diagnosis at the hospital, so her loved ones should be concerned. However, the Newman family mayhem won’t stop Victor (Eric Braeden) from scheming. He’ll manage to gain an advantage over Nick (Joshua Morrow) before long.

Other Young and the Restless spoilers state that Sharon will demand answers from Tessa (Cait Fairbanks). She’ll want to know all about Tessa’s history with Zack. This might be the only way to resolve the sex ring case. Of course, it could also help Scott and Abby if they’re still missing by then.

Across town, secrets will be a problem for Gloria (Judith Chapman). She’ll face a crisis thanks to facts she’d rather keep buried. We’ll give you updates as other Y&R details emerge. Stick with the CBS soap and don’t forget to check CDL often for the latest Young and the Restless spoilers, updates and news.