The Young and the Restless Spoilers: Week of October 23 – Victoria Rushed to Hospital After Hilary Hour Collapse – Billy Battered 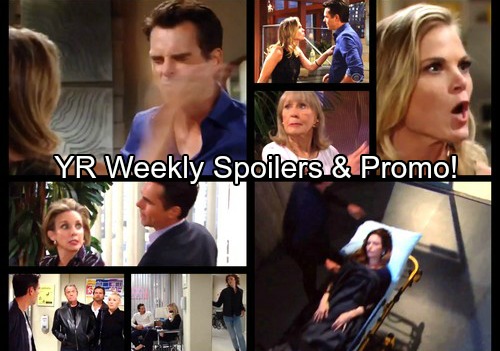 The Young and the Restless (Y&R) spoilers for the week of October 23 through 27 tease that some jaw-dropping moments are on the way. For starters, Chelsea (Melissa Claire Egan) will find Victoria (Amelia Heinle) after her car crash. She’ll quickly approach the vehicle to make sure Victoria’s OK.

Victoria will suggest that she just has a few bumps and bruises. She won’t think it’s a big deal, so she’ll ask Chelsea to keep this a secret. Later, Victoria will cover her facial bruising with makeup and prepare to go on Hilary’s (Mishael Morgan) show. She won’t think Brash and Sassy can afford any delays. 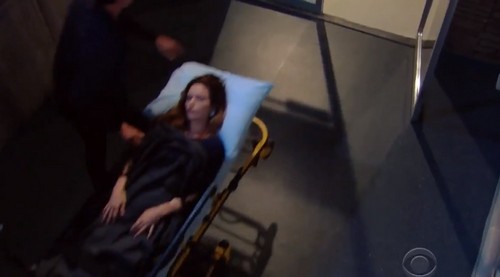 Meanwhile, major drama will hit over at Phyllis (Gina Tognoni) and Billy’s (Jason Thompson) place. She’ll plant a text for Billy to read and he’ll take the bait. Y&R spoilers say Phyllis will finally decide she can’t take it anymore. She’ll confront Billy about snooping, but he’ll just complain about her leaving him out of the loop on Jabot’s latest launch.

Phyllis will snap that she knows everything. She’ll contend that she caught Billy stealing info off Jabot’s server and now he’s reading her texts. Phyllis will rage about how Billy used her. She’ll demand to know why Billy would hurt her like this.

Billy will fire back that he’s not the only one keeping secrets. Phyllis will eventually give Billy a hard slap and shove him toward the door. She’ll throw clothes as she declares that she wants him out. At the TV studio, Victoria will prepare to debut the new men’s products. Unfortunately, this interview won’t turn out how she expects.

The Young and the Restless spoilers state that the crash impact will affect Victoria in a big way. It looks like she’ll become disoriented and keel over. Once Victoria is rushed to the hospital, several friends and family members will arrive. Reed (Tristan Lake Leabu) will panic as soon as he hears the news. 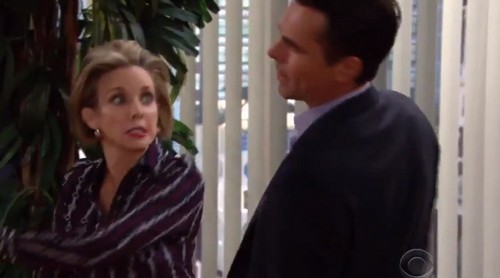 Chelsea will pipe up about the car accident as the doctors get to work. Billy, Nikki (Melody Thomas Scott), and Victor (Eric Braeden) will gather in the waiting area. The rest of the Newmans probably won’t be far behind. They’ll all just hope that Victoria can pull through this and get back to normal.

Based on Y&R’s weekly promo, it appears Dina (Marla Adams) will also face off with Graham (Max Shippee) somewhere. Gloria (Judith Chapman) will have an intense showdown with Billy as well, so there’s a lot going on this week. We’ll give you updates as other Young and the Restless details emerge. Stick with the CBS soap and don’t forget to check CDL often for the latest Young and the Restless spoilers, updates and news.