The Young and the Restless Spoilers: Nick and Chelsea Get a Lead on Chloe – Billy Quits His Job – Cane Frantic Over Flash Drive

BY Heather Hughes on May 24, 2017 | Comments: 6 comments
Related : Soap Opera, Spoiler, Television, The Young and the Restless 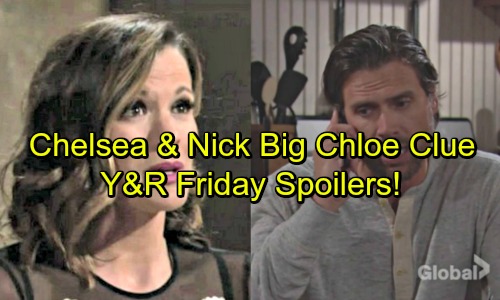 The Young and the Restless (Y&R) spoilers for Friday, May 26, tease that Nick (Joshua Morrow) will join Chelsea (Melissa Claire Egan) in her quest for answers. She’s determined to find Chloe (Elizabeth Hendrickson) and learn the identity of her accomplice. Chelsea just can’t rest until she knows the whole story.

Nick is worried about his family’s secrets being exposed, but he knows that Chelsea desperately needs closure. He’s willing to help if this is what it’s going to take for her to heal. The Young and the Restless spoilers say Nick and Chelsea will speak with a woman who may have some info. This woman will suggest that she can tell them about Chloe for a price.

Luckily, Nick has plenty of money to toss at this lady. He’ll undoubtedly make this happen for Chelsea. What will this mysterious woman reveal? It’s clear that Chelsea is inching closer to her goal of securing justice for Adam (Justin Hartley). Let’s hope she pulls it off.

Once Cane understands what’s at stake, he’ll start to freak out. Y&R spoilers say he’ll frantically ask Lily if she knows where the flash drive is. Cane will hope that Lily hasn’t sent it to her agent. Of course, her husband’s agitation will only make Lily curious. It looks like she’ll be the one watching the footage soon.

Other Young and the Restless spoilers state that Billy (Jason Thompson) will make a big decision. Things went south quickly in Hollywood. The trip was going well until Cane’s (Daniel Goddard) manipulation caused a brutal crisis. Billy was caught betting on tape and it’s tough for the public to believe this former gambling addict was joking. 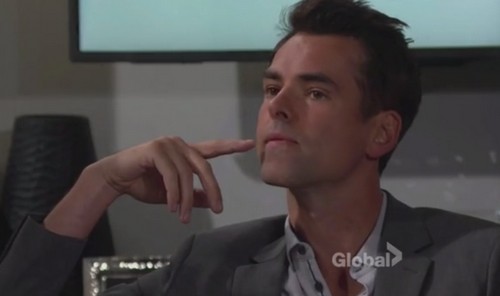 Victoria will return from Toronto where she tried to undo the damage, but it may or may not have panned out. Regardless, Billy will insist that he’s going to ease the tension. He’ll respectfully tender his resignation to relieve some of the pressure Victoria is facing.

Will Victoria urge Billy to stay or agree that it’s for the best? We’ll give you updates as other news comes in. Stick with Y&R and don’t forget to check CDL often for the latest Young and the Restless spoilers, updates and news.