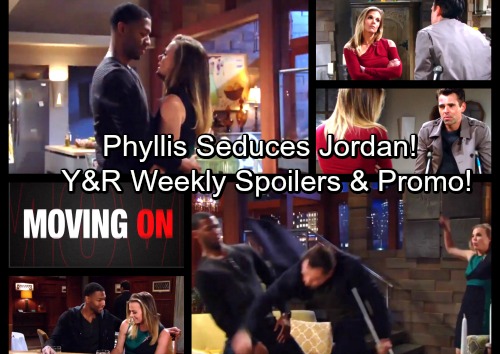 The Young and the Restless (Y&R) spoilers tease that Phyllis (Gina Tognoni) and Billy (Jason Thompson) will make some terrible decisions. For starters, Phyllis will get tangled up in Hilary’s (Mishael Morgan) mess. These schemers have formed a strong friendship lately, so Y&R might as well take advantage of that.

Hilary will find herself in a real bind when she goes after Jordan (Darnell Kirkwood). She’ll hope to do a huge story on Jordan’s shady past. Unfortunately, Chelsea (Melissa Claire Egan) will prove to be an obstacle. She’ll refuse to offer any info about her previous connection to Jordan.

Chelsea will want Hilary to back off, but that’s not happening. When Hilary gets an idea in her head, there’s no stopping her. That’s especially true when revenge is involved! The Young and the Restless spoilers reveal that Chelsea will freak over the possibility of spilled secrets. She’ll find Jordan and urge him to take care of this before it gets out of hand.

Jordan will corner Hilary and threaten to expose her nude photos if she keeps this up. He’ll point out that he saved copies for a rainy day. However, Hilary won’t be scared off. It appears she’ll continue her fight to bring Jordan down.

That’s where Phyllis comes in. Y&R spoilers say she’ll seduce Jordan in an attempt to help Hilary with her mission. Perhaps Hilary will rummage through Jordan’s place while Phyllis keeps him busy. Jordan will fall for the trap hook, line and sinker. He can’t resist a beautiful woman who’s anxious for sex.

Phyllis may not actually take Jordan to bed with her, but he’ll think that’s where this night is headed. Of course, we haven’t forgotten about Billy. He’ll make a string of bad choices, too. The Young and the Restless spoilers state that Billy will get drunk and show up looking for Phyllis. He’ll plan to beg for another chance.

Instead, Billy will find Jordan with his hands all over Phyllis. As you would expect, Billy will hit the roof! The Young and the Restless spoilers say Billy will try to punch Jordan in the face, which will probably land him behind bars for the night. Billy will indeed be arrested this week, so Jordan may call the cops on him.

It sounds like some rough episodes are ahead for all parties involved. We’ll give you updates as other Y&R news comes in. Stay tuned to the CBS soap and don’t forget to check CDL often for the latest Young and the Restless spoilers, updates and news.