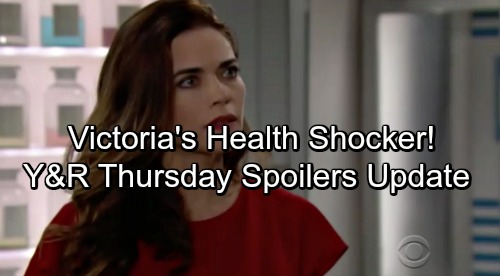 The Young and the Restless (Y&R) spoilers for Thursday, October 5, tease that Victoria (Amelia Heinle) and Billy (Jason Thompson) will struggle to find qualified applicants. They’ll feel like Jack (Peter Bergman) is scooping up anyone who’s decent. When Neil (Kristoff St. John) drops by later, he’ll wonder if Victoria has any extra work for Lily (Christel Khalil). He’ll suggest that she’s focused on her future now.

Since Victoria needs someone to fill Cane’s (Daniel Goddard) position anyway, she’ll think Lily might be a good fit. Billy will agree that it’s a great plan, so they’ll formally extend the offer. A stunned and grateful Lily will quickly accept.

Meanwhile, Hilary (Mishael Morgan) will give Cane a hard time about losing hope. She’ll insist that Cane needs to hang in there and fight for his marriage. Afterward, Cane will drop by Juliet’s (Laur Allen) suite. He’ll learn that she had a bit of a run-in with Charlie (Noah Alexander Gerry) earlier.

When Juliet mentions the divorce news, Cane will state that she shouldn’t worry about it. She’ll bring up Hilary’s attempt to drive her out of town, but Cane will be against the idea. He’ll take Juliet’s hand and urge her to stick around.

Other Young and the Restless spoilers say Hilary will bump into Victoria. She’ll be sorry for their previous conflict, but Victoria will reject the apology. Since Hilary and Jack (Peter Bergman) are so chummy, Victoria will believe they must be plotting something.

As Victoria gets increasingly agitated, she’ll battle intense pain and ringing in her ears. After Victoria has an epic outburst, she’ll wander off to grip her head. Hilary and Jordan (Darnell Kirkwood) will look surprised by Victoria’s sudden meltdown. They’ll definitely wonder what’s up with her these days.

Other Y&R spoilers say Myrna (Marcia Rodd) will tell Graham (Max Shippee) to stay focused. During a phone call, Graham will hint that he feels bad for Ashley (Eileen Davidson). He’ll note that learning she wasn’t a true Abbott must’ve been difficult.

Of course, Myrna won’t care about Ashley’s issues. Since Brent left his family to be with Dina, she’ll insist that they have to make her pay. Myrna’s hoping Graham can get Dina’s kids to reject her. When Graham fishes for more affair info later, Dina will contend that the subject is closed. She’ll indicate that she put all that in the past.

At Jabot, Ashley (Eileen Davidson) will find out that she’s receiving a major award. She’s Innovator of the Year! John (Jerry Douglas) once received this honor as well, so it’s a big deal for Ash. Jack will want to throw a party to celebrate the accomplishment.

After Ashley invites Billy, he’ll drop a hint about a new project. Ashley will realize that Billy took Jack’s bait. She’ll give Jack updates and he’ll obviously be on cloud nine. It sounds like everything is going according to plan, but a huge problem should hit next week.