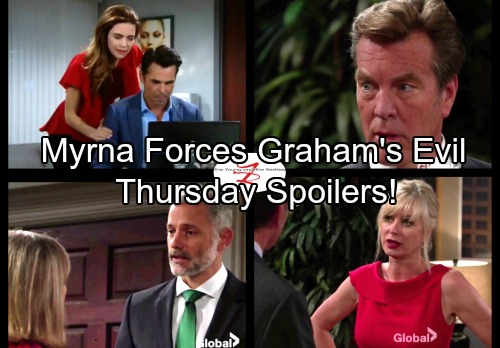 The Young and the Restless (Y&R) spoilers for Thursday, October 5, tease that Graham (Max Shippee) will get in touch with Myrna (Marcia Rodd) again. He’ll hint that Dina (Marla Adams) is starting to get suspicious thanks to Ashley (Eileen Davidson). After sharing a tense chat with Dina in Wednesday’s Y&R episode, Graham may suggest that he should back off.

Myrna will contend that Graham had better not get soft. She’ll point out that they’re so close to making Dina pay for what she did to them. There’s a good chance that Graham will ultimately agree. He’ll continue to play this dangerous game and hope he doesn’t get burned in the end.

Meanwhile, Victoria (Amelia Heinle) and Billy (Jason Thompson) will face similar fears. Before we get to those concerns, Billy will insist that they have to use Jack’s (Peter Bergman) strategy to their advantage. After checking the Jabot server on Wednesday, Billy will feel like they have an opportunity to get ahead.

Brash and Sassy can give their men’s line a boost since Jabot seems to be making drastic cuts. The key word there is “seems.” In reality, Jack is doubling the budget! On Thursday, The Young and the Restless spoilers hint that doubts will creep in. Billy will tell Victoria that after everything they’ve done to beat Jack, it could all be for nothing. There’s no guarantee that their gamble will pay off.

Perhaps Billy’s attitude shift will have something to do with Ashley’s great honor. The Young and the Restless spoilers say she’ll be celebrated as “Innovator of the Year.” Jack will congratulate Ashley and note that her name will forever be linked with John’s (Jerry Douglas). He’ll assure Ashley that their father would be so proud of her.

Billy might be worried about Jabot gaining too much buzz from this prestigious award. They obviously don’t need something else to hinder Brash and Sassy’s climb to the top. Of course, Billy is really his own worst enemy. He’ll eventually realize he sabotaged himself by falling for Jack’s server trap.

Look for Billy’s plan to blow up in his face within the next few episodes. We’ll give you updates as other Y&R news comes in. Stay tuned to the CBS soap and don’t forget to check CDL often for the latest Young and the Restless spoilers, updates and news.