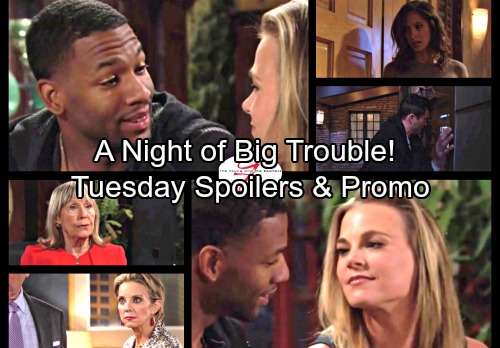 The Young and the Restless (Y&R) spoilers for Tuesday, November 7, tease that Cane (Daniel Goddard) and Billy (Jason Thompson) will manage to put their conflict behind them. Things got pretty hostile thanks to all the Brash and Sassy drama, but there’s no point in continuing the feud. After all, they’ve both been fired now.

Billy and Cane will actually find something to bond over in Tuesday’s Y&R episode. They’ll open up to each other about their relationship issues and how much they want to fix them. Cane knows he messed up big time, but he feels like Lily (Christel Khalil) is completely shutting him out. Phyllis (Gina Tognoni) also feels betrayed, so Billy will keep working on a way to get out of the doghouse.

The Young and the Restless spoilers say Cane and Billy will decide to drown their sorrows. Once they’ve got enough liquid courage in them, they’ll head off on separate adventures. Cane will march over to Lily’s house so he can pour his heart out. He’ll slur his words as he shouts outside her door.

Cane will yell that he doesn’t want to get a divorce. He’ll tell Lily how much he loves her, but she won’t look impressed. A drunken outburst isn’t really the best way to win Lily over. The cops will eventually show up to arrest Cane for disorderly conduct. He’ll have to spend the night behind bars, so this plan clearly won’t work out like he expected.

Meanwhile, Phyllis will make her move with Jordan (Darnell Kirkwood). She’ll slide her hand down his thigh as they exchange some flirty banter. Phyllis will just be serving as Hilary’s (Mishael Morgan) partner in crime, but Jordan will certainly jump at the chance to head back to her place. He won’t know it’s all a ruse to get Hilary what she wants.

Billy won’t understand that either, so there’s going to be trouble when he shows up and takes a swing at Jordan. Across town, Dina (Marla Adams) will have some harsh words for Gloria (Judith Chapman). She’ll contend that Gloria is nothing but another floozy whose only skill is how good she is between the sheets.