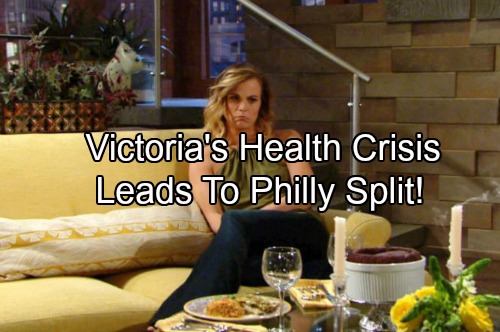 The Young and the Restless (Y&R) spoilers tease that Victoria (Amelia Heinle) will face even more stress. She’ll be pushed to her breaking point on next week’s new episodes, July 24 – July 28, and that could bad news for her health. Y&R fans will recall that Victoria and Abby (Melissa Ordway) had a fierce faceoff the night of Nikki’s (Melody Thomas Scott) concert. After Abby threw a drink, Victoria took quite a tumble.

Later, Victoria experienced some troubling symptoms. The blow to her skull gave her a major headache and threw off her balance. Victoria nearly collapsed during her chat with Nick (Joshua Morrow), but she assured him that she was fine.

After everything that’s gone on at Brash and Sassy, Victoria is feeling drained. She’ll probably blame work drama if her symptoms persist. In fact, it looks like The Young and the Restless will pile on the problems. Jack (Peter Bergman) will give Cane (Daniel Goddard) a job at Jabot, but only if he provides the dirt on his old company. That’s one more threat for Victoria to worry about.

Victoria’s latest financial reports were a disaster as well. The upcoming Newman scandal won’t help the situation. Brash and Sassy could take a serious hit thanks to Nick and Victor’s (Eric Braeden) behavior. The last thing Victoria needs is another round of negative press.

The Young and the Restless buzz hints that a health crisis could be brewing. It’s doubtful that Y&R would show Victoria struggling symptoms without a reason. They seemed to be setting up a shocker. Victoria may have a brain hemorrhage or something along those lines. As blood slowly pools, her condition may get worse.

This might be the beginning of a “Villy” reunion. It’s clear that Billy (Jason Thompson) still cares about Victoria. If her life is on the line, you can bet he’ll be completely distraught. Victoria and Billy have a lengthy history together. She’s the mother of his children and he still considers her a close friend.

Y&R buzz is that Victoria will be rushed to the hospital after a frightening episode. It’s not difficult to imagine a distressed Billy sitting by Victoria’s bedside. The Young and the Restless viewers could see Phyllis (Gina Tognoni) battle jealousy. Her days as Billy’s main squeeze are likely numbered.

Of course, Billy would be irritated if Phyllis showed signs of envy during the chaos. He could argue that it’s inappropriate when Victoria is lingering between life and death. Afterward, Billy could nurse Victoria back to health and their feelings could grow stronger.

Y&R has certainly laid the groundwork for a storyline like this to play out with the ultimate goal of reuniting Victoria and Billy – Sally Sussman’s stated goal. Stay tuned to the CBS soap and don’t forget to check CDL often for the latest Young and the Restless spoilers, updates and news.