The Young and the Restless Spoilers: Wednesday, December 27 – Hilary Gets on Lily’s Bad Side – Chelsea Can’t Shake Adam Memories 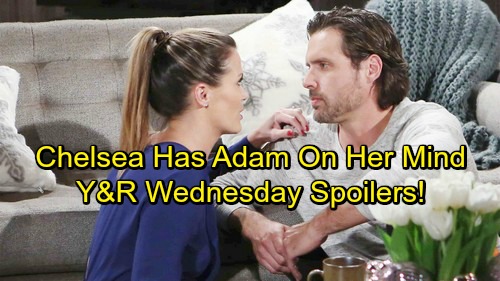 The Young and the Restless (Y&R) spoilers for Wednesday, December 27, tease that Jack (Peter Bergman) will try to get his business goals back on track. Now that he’s reclaimed the CEO spot, he intends to move forward with his Chancellor Industries plan. It’s clear that Jack’s going to do whatever he wants. He won’t let Ashley (Eileen Davidson) or other naysayers stand in his way.

Jack will let Jill (Jess Walton) know that his offer’s still on the table. She may be worried about the instability at Jabot right now, but Jack will provide reassurance. It seems Jill will have to mull everything over a bit longer. Y&R spoilers state that Billy (Jason Thompson) and Cane (Daniel Goddard) will give Jill a warning. They’ll feel like it’d be a mistake to strike a deal with Jack, who may be in over his head.

Once Cane and Billy have voiced their concerns, Jill will have even more to think about. She’ll have to decide if Jack’s truly capable of taking on this challenge. Since Cane’s going to need something to do, there’s a good chance Jill will leave Chancellor in his hands. Things are looking up for Cane, so The Young and the Restless probably won’t create too many setbacks anytime soon.

Instead, Cane needs to focus on Lily (Christel Khalil) and repairing his family. He’ll have hope for the future pretty soon. In the meantime, Lily and Hilary (Mishael Morgan) will clash over some suspicions. It looks like Lily will still believe Hilary has an agenda. She’ll toss around a few threats as she urges her rival to stay in line.

Lily may not be with Cane at the moment, but she doesn’t like the idea of Hilary showing interest. She also doesn’t want Hilary to do anything that might backfire on Cane. Of course, Hilary’s love for little Sam could cause tension as well. Deep down, Lily wants to be a mom to Cane’s child. She won’t think Hilary should butt in where she doesn’t belong.

Elsewhere, Chelsea (Melissa Claire Egan) won’t be able to shake old memories. It sounds like she may have Adam (Justin Hartley) on her mind. The Young and the Restless spoilers suggest that the paternity bomb could drop in the new year. Chelsea’s feelings could play right into the baby drama and Adam’s potential return.

Y&R fans won’t want to miss all the excitement. We’ll give you updates as other news comes in. Stick with the CBS soap and don’t forget to check CDL often for the latest Young and the Restless spoilers, updates and news.

From our family at The Young and the Restless to yours, we wish you a Merry Christmas! 🎁 #YR pic.twitter.com/SFClyENKrG