BY Kinsley Goldman on November 17, 2017 | Comments: one comment
Related : Soap Opera, Spoiler, Television, The Young and the Restless 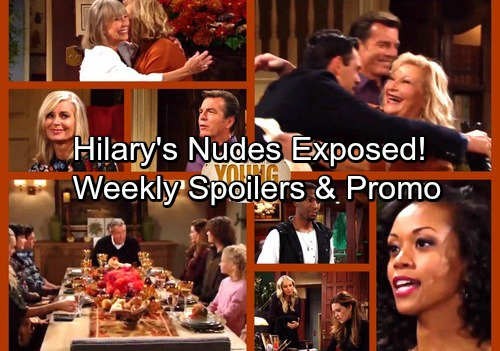 The Young and the Restless (Y&R) spoilers for the week of November 20-24 tease we’ll see a great mix of shockers and heartwarming moments. First, let’s talk about those bombshells. Several Genoa City residents will face some serious threats over the next couple episodes.

Hilary (Mishael Morgan) will certainly be at risk thanks to Jordan (Darnell Kirkwood). He’ll get in Hilary’s face and remind her that she wrecked his life. Jordan will contend that Hilary should expect to get her own life wrecked as well. Hilary will pretend she’s not scared, but part of her will probably be a bit nervous. She played dirty and terrible things can happen when you anger the wrong person. 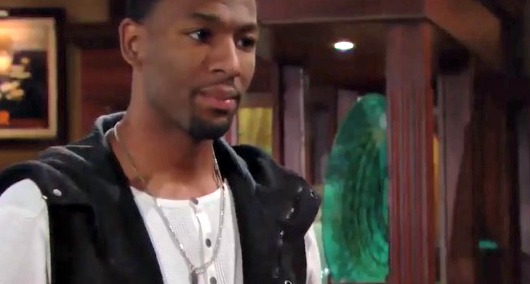 In this case, the enemy Hilary’s made could have major ammunition. The Young and the Restless spoilers hint that Hilary’s nude pics could finally come back into play. Y&R’s weekly promo shows a flashback of Hilary dropping her sheet for that photoshoot. Jordan will grab a cameraman and do an intro about Hilary not being who she claims to be.

Other Young and the Restless spoilers say Abby (Melissa Ordway) will offer Victoria (Amelia Heinle) a warning. She’ll note that her sister shouldn’t get used to that COO chair. Abby will insist that it’s only a matter of time before Victoria fails. Of course, Abby will want to rush the process along. She’ll recruit Scott (Daniel Hall) for her mission, which could spell trouble.

Sparks have been flying for Scott and Abby lately, so teaming up could intensify their attraction to each other. The more time they spend together, the more dangerous their connection becomes. Sharon (Sharon Case) seems destined to get her heart broken sooner or later. 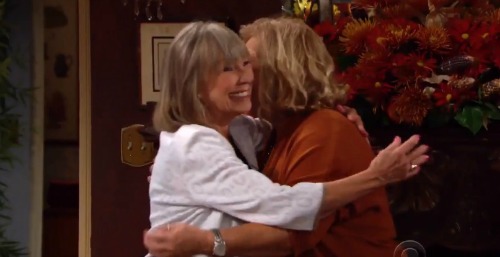 Now let’s talk about the heartwarming portion of the week. Despite Dina’s (Marla Adams) devastating diagnosis, Jack (Peter Bergman) will be determined to make this the best Thanksgiving ever. Ashley (Eileen Davidson) and Jack will hide Dina’s Alzheimer’s from the rest of the Abbotts, but at least they’ll enjoy the holiday.

Billy (Jason Thompson) will manage to patch things up with Phyllis (Gina Tognoni) later, so that’s good news. At the ranch, the Newmans’ gathering will get off to a rocky start when Nikki (Melody Thomas Scott) and Nick (Joshua Morrow) crash the party. However, it looks like Victor (Eric Braeden) will put up with his annoyances for the sake of holiday peace.

Y&R fans won’t want to miss this week’s special episodes. We’ll give you updates as other details emerge. Stick with the CBS soap and don’t forget to check CDL often for the latest Young and the Restless spoilers, updates and news.