The Young and the Restless Spoilers: Y&R 2018 Forecast Preview – Resurrection, Redemption and Remarriage

BY Sean O'Brien on December 27, 2017 | Comments: one comment
Related : Soap Opera, Spoiler, Television, The Young and the Restless 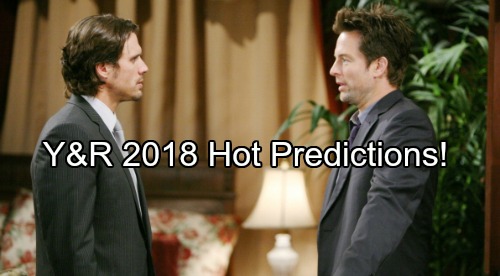 The Young and the Restless spoilers tease that Christmas 2018 will look far different than this year’s celebration in Genoa City. A long lost character will have been resurrected, another will be fully redeemed and a passionate couple will be remarried, among other things.

There are many deceased characters on Y&R. The resurrection of one in particular will set the soap world ablaze. But let’s save that preview until the end of this holiday feature.

Cane (Daniel Goddard) really went off-track in 2017. He wrecked his marriage, the relationship he had with his suddenly teenage kids and destroyed his professional reputation. However, the birth of his second son has already helped him to change course.

Y&R must, not should, must allow Cane to redeem himself by raising Sam with Lily (Christel Khalil). That means Lane’s recent thaw will lead to a full reunion.

Charlie (Noah Alexander Gerry) has been championing his dad’s cause for awhile. Mattie (Lexie Stevenson) recently admitted that she misses her father and therefore is primed to favor family revival. Lily knows in her heart that she still loves her husband and wants their relationship to be restored.

Make Lane happen before, or by next Christmas Mal Young. And thank you in advance for listening to the audience.

Along with Lane’s hoped for remarriage will be the re-coupling of two Ashby family relatives. Hevon, aka Hilary (Mishael Morgan) and Devon (Bryton James) are also still in love.

This duo actually ended their union through an amicable divorce when the year started. They each rebounded to other people, but have since moved on.

Hilary has been trying to be a better person and is making progress. Except for the scenario that resulted in Hevon’s initial pairing, Devon has always been a good guy.

Together, Hevon is arguably Y&R’s best couple. A sequel would surely be written in a different direction. Possibly, Hilary isn’t the one who veers off-course after they remarry and have a baby?

Adam Newman (previously played as an adult character by Chris Engen, Michael Muhney and Justin Hartley) is obviously the person whose resurrection would set the soap world ablaze. That declarative statement also implies that a fourth actor would become Adam, or that Muhney would return. He’s eligible for rehire, as the interview he had with Y&R in the summer of 2014, to return to the show, confirmed.

If TPTB at Y&R want a great ratings boost, that it would need to then sustain with compelling writing, then Muhney must be tapped to reembody Adam. How that happens is why daytime drama was, is and will always be called soap.

Of course there are many other outcomes that will be seen by December 2018. As of now, let’s digest what’s been suggested and hope. CDL is a leading source for everything linked to The Young and the Restless. Check back regularly for Y&R spoilers and news!