The Young and the Restless Spoilers: Y&R Star and General Hospital Alum Gets Major Movie Role

BY Joanna Mazewski on October 18, 2017 | Comments: one comment
Related : General Hospital, Soap Opera, Spoiler, Television, The Young and the Restless 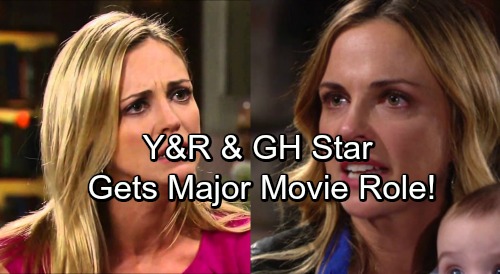 The Young and the Restless and General Hospital alum Kelly Sullivan is making the jump from daytime television to the Hollywood big screen. New reports indicate that Kelly, who many fans remember as Kate Howard and Connie Falconeri on General Hospital, has a role in Denzel Washington’s upcoming movie, Roman J. Israel, Esq.

Kelly is reportedly playing a realtor in the film. Oscar winner Denzel Washington stars as Roman J. Israel, a driven defense attorney who finds himself fighting for his life and his career after a major crisis unfolds. He’s been fighting the good fight just to see others take credit for his work. The film also stars Irish actor Colin Farrell, Carmen Ejogo and Days of Our Lives alum Shelley Hennig.

The Young and the Restless fans of Sage and General Hospital fans of Connie are excited to know that this isn’t Kelly’s only movie right now. She’ll also be starring in a film called Maybe I’m Fine, which is about a woman who looks for help in divorcing her dead-beat musician husband. The movie is directed by Elizabeth Blake-Thomas and written by Casey Greenberg and also stars Isabella Blake-Thomas, Rob Mayes, Flex Alexander and more. The film is expected to be released in 2018.

Roman J. Israel, Esq. hits theaters on November 3. So far Kelly Sullivan herself hasn’t made any comments about her new role or her future projects for that matter. In the meantime, don’t forget to check back with CDL for all the latest news, updates and spoilers on The Young and the Restless, General Hospital and all of your favorite daytime television shows right here.