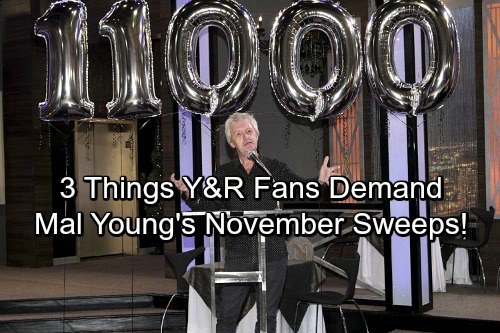 The Young and the Restless (Y&R) spoilers tease that Mal Young material is set to hit the screen soon. As the show’s new head writer, Young undoubtedly hopes to please viewers and keep them tuning in. When his first episode airs on October 25, just at the start of November Sweeps, a new Y&R era will begin. If Young’s looking for tips, we’ve got ‘em! Here are three things fans want to see more of.

Romance always going to be a big part of any soap, but that can’t be all it’s about. Fortunately, The Young and the Restless has been highlighting family bonds lately. Many fans would love to see that trend continue. It’s been nice to watch the Abbott clan deal with a crisis together.

When Ashley’s (Eileen Davidson) paternity was exposed, it forced the family to rally around her. Love triangles are fine when the time is right, but sometimes it’s awesome see a different kind of love. Family ties are just as important, especially when you’re trying to keep the show’s history alive.

If someone behaves out of character for a plot point, it can frustrate fans. Y&R can get away with it occasionally, but it’s better to focus on building who these people are. They’ll obviously make mistakes, but there has to be a decent reason. Some soap writers struggle with that concept.

Other daytime drama writers focus solely on character development, which can turn the show into a total snooze fest. Stuff actually needs to happen or viewers will change the channel. The public paternity exposure was a great example of how to balance all that. We saw electrifying scenes that kept us on the edge of our seats, but the tender family moments afterward touched our hearts.

Since Mal Young also serves as Y&R’s executive producer, let’s hope he’s steering the ship toward his vision. Fans are already noticing a shift in the show, so perhaps some tweaks were made along the way. Regardless, we’re rooting for Young to keep this momentum going!

Here’s one issue that The Young and the Restless has had a little trouble with, but it seems to be improving. For a while, a handful of characters were eating up all the airtime. Victoria (Amelia Heinle), Nick (Joshua Morrow) and Victor (Eric Braeden) had become show hogs, but that seems to be evening out a bit.

In the future, most Y&R viewers would love to see more characters in the mix on a daily basis. Maybe another umbrella story could incorporate forgotten Genoa City residents and give them something to do. If the show wants to throw in an Adam Newman recast as well, we won’t complain!