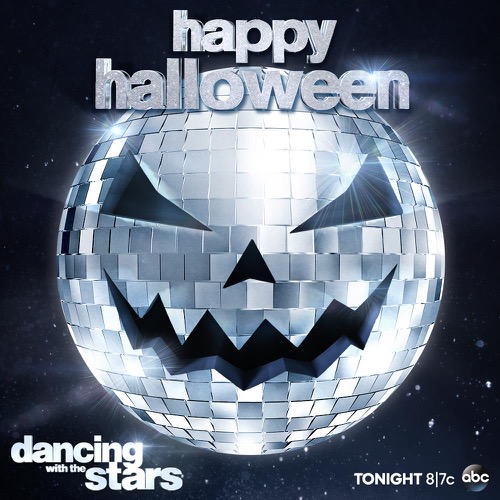 On tonight’s show as per the ABC synopsis, “The eight remaining couples have spent the week learning all of the bloodcurdling tricks that it will take to treat the viewers to some terrifyingly fun dances, as Halloween Night comes to “Dancing with the Stars.”

Before the Team dances and the first results Tom Bergeron reveals the surprise twist – Joining us is Season 1 Champion Kelly Monaco, Season 19 Champion Alfonso Ribeiro and Season 17 Runner-up Corbin Bleu, who are just a few of the stars returning to dance with the couples next Monday night in the trio round. Kelly says she is nervous as this ballroom is electric. Alfonso worries about going up against these people who are so good; Corbin is ready to jump back in!

The Grim Reaper hands Tom and Erin a black envelope.

The remaining couples hug as this 7th week of competition comes to a close with a double elimination, both couples are going home!