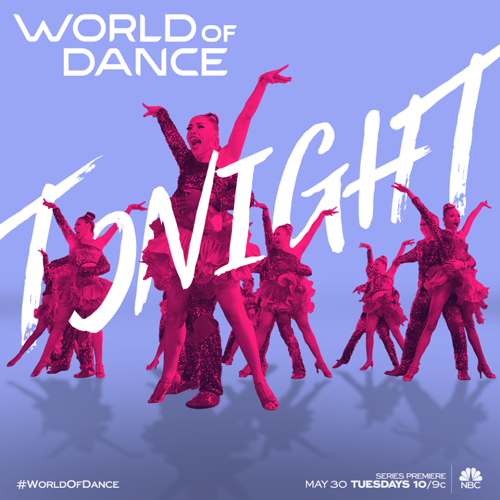 Tonight on NBC the World of Dance premieres with judges Jennifer Lopez, Derek Hough and Ne-Yo with an all new Tuesday, May 30, 2017, episode and we have your World of Dance recap below. On tonight’s Word of Dance premiere episode as per the NBC synopsis, “Elite dance acts enter the arena to face off in the series premiere of this reality-competition show in which dancers battle in heats of artistry, precision, and athleticism. Jenna Dewan-Tatum hosts.”

Tonight’s Tuesday May 30 World of Dance recap begins now – Refresh Page often to get the most current updates!
The premiere of World of Dance begins and over the next ten weeks the best dancers in the world will compete for the title of world’s greatest dancer, any style, any age for a prize of $1,000,000. Jenna Dewan Tatum is the host.

Dancers will compete within three divisions: Junior (under age 18), Upper (up to 4 dancers, 18 and older) and Team (5 or more dancers, 18 and older). Dancers will be judged on a scale of 0-20 in five different categories: Performance, Technique, Choreography, Creativity and Presentation for a maximum score of 100. Each dancer will battle it out in four rounds: The Qualifiers, The Duels, The Cut and The Divisional Finals. The division finalists will compete in the finals for a prize of one million dollars.

Jennifer Lopez, Derek Hough and NE-YO will judge each performance. The first act is D’Angelo (age 16) and Amanda (age 17) and will compete in the Junior division. They have been dancing together for 10 years and will perform a ballroom number. D’Angelo’s dad Manny is their coach and he pushes them hard but they love it.

After their performance Jennifer can’t believe they are juniors. Derek loved it. He saw Jive, he saw Paso Doble and some Cha Cha. It was very cool. He tells Amanda to use her hips just a little bit more. He thinks it was a million dollar performance. Jennifer says it was flawless. NE-YO says they showed every single thing on the check list. Derek gives them a 87, Jennifer a 88 and NE-YO a 90 for an average of 88.3 They will be moving on to the next round.

Larry and Laurent are the next performers and are 28 year old twins from Paris. They are the Les Twins and will dance a hip hop number in the Upper division. Larry tells the audience how hard it is to have a twin but Laurent says it is great. They are the youngest of 9 children raised by a single mother and were very poor growing up. They started dancing in the streets of Paris and Beyoncé saw them on YouTube. They toured with her for 6 years.

After their performance NE-YO says all of their moves were super clean and showed emotion that he hasn’t seen from them before. Jennifer says their performance shows that the best dancers in the world are here tonight. Derek says their style is so special and transports the audience. Derek and Jennifer both give them a score of 96 and NE-YO gives a 95 for an average of 95.7.

NXT LVL is a clogging group with 9 members from all over America. They have a show called Thunder and Lights which they perform in South Carolina. NE-YO loved their performance but as he thinks of the criteria he thinks they need to take it to the next level. Jennifer thought it was very clean for the intricacy of the moves they make. Jennifer thought it was very dynamic. Jennifer gives them a score of 78, Derek an 80 and NE-YO a 73. Their average score of 77 does not take them to the next round.

Keone and Mari have been married for four years and will perform in the Upper division dancing an urban dance. They post videos of their dancing online. Derek found them to be very lovable and likeable. He was also impressed with their musicality. Jennifer loved the story they told. NE-YO loved their energy. Jennifer scores them a 83, Derek a 87 and NE-YO a 85. Their average score is 85 and they will move on to the next round of the competition.

The Kinjaz are a group of Ninjas. They are second generation Asian Americans who find their inspiration from Ninjas. Derek was at a loss for words after their dance. Every movement was perfect. NE-YO thinks they had such a WOW factor. Every eye was locked in on every movement. Jennifer says it wasn’t enough. She wants more. It was so damn good. Jennifer and Derek score them a 92, and NE-YO an 89. Their average score is 92 and they will move on.

Diana Pambo is just 11 years old and will perform in the Junior division. She will dance a contemporary dance. Jennifer says she could see the live fire in Diana. She was so impressed with the passion in her dance. Derek says she nailed all five boxes that the judges use. NE-YO says she was quality all the way. Jennifer gives her a score of 92, Derek a 89 NE-YO a 88. Her average score is 89.7 and she will be in the next round of competition.