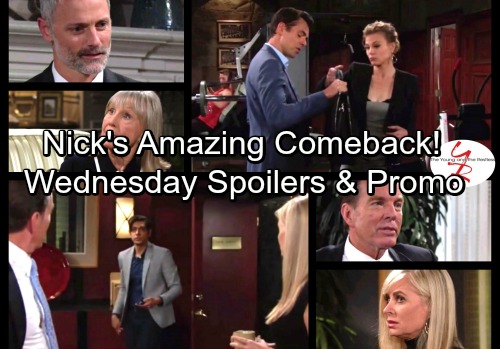 The Young and the Restless (Y&R) spoilers for Wednesday, October 4, Billy (Jason Thompson) will hurry Phyllis (Gina Tognoni) off to her massage appointment. He’ll use the opportunity to peek at Phyllis’ laptop, but Victoria (Amelia Heinle) won’t approve. Later, Billy will provide updates on what he’s learned. He’ll hope that this scoop will give them the upper hand.

Victoria won’t be happy that Billy resorted to theft again, but she’ll want the latest news anyway. Billy will insist that Jack (Peter Bergman) is making drastic cuts to the men’s line. He’ll think they can take advantage of this blunder by upping their own men’s line budget and offering more to the customers. Victoria will worry about the risk, but she’ll ultimately decide they should go for it.

Meanwhile, Ravi (Abhi Sinha) will find out that Dina’s (Marla Adams) password was used again. Jack will take that as a sign of success. He’ll feel confident that Billy is going to crash and burn thanks to the bogus info he supplied. Jack intends to double his men’s line budget, not cut it. The false memo could leave Brash and Sassy in quite a bind.

In Dina’s suite, Ashley (Eileen Davidson) will confess that Graham (Max Shippee) wasn’t behind the cyberattack. However, she’ll maintain that Graham has been lying to Dina. Once Graham walks in, Ashley will reiterate that he’s not to blame for hacking Jabot. Y&R spoilers say they’ll spar when Graham hints that Ashley is a lot like him.

After Ashley stomps off, Dina will ask Graham about her daughter’s accusations. She’ll want to know if Graham’s mother is actually alive. Graham will claim that he’s paying for his aunt’s retirement facility, so Dina will drop the matter. She’ll seem convinced that Graham is a trustworthy companion.

Back at Jabot, Ashley will wonder how Ravi’s research is going. He’ll admit he hasn’t found much on Graham’s history. There were no records of his name in the Genoa City school system. They’ll suspect that Graham may have been using another name back then, but Ashley won’t think it matters. She’ll note that they should really be focusing on Myrna (Marcia Rodd) and where she used to be employed.

Other Young and the Restless spoilers say Nick (Joshua Morrow) will manage to put everything together. He’ll realize Victor (Eric Braeden) must’ve hacked his account with Kevin’s (Greg Rikaart) help. After Nick fills Chelsea (Melissa Claire Egan) in, he’ll vow to deliver a blow of his own. Nick will promise that Victor will never see this stunning blow coming!