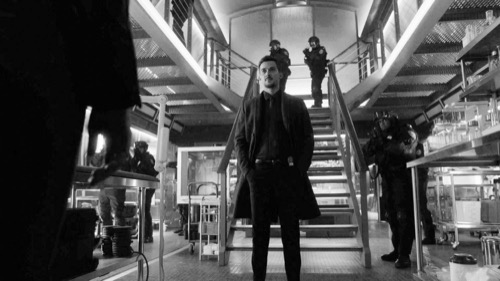 Tonight on CBS Zoo continues with an all new Thursday, June 29, 2017, episode and we have your Zoo recap below.  On tonight’s Zoo season 3 premiere as per the CBS synopsis, “Ten years after the animals were cured but at the cost of sterilizing the human population, a new threat rises in the form of “the hybrids,” an army of unstoppable lab-made creatures focused on destroying mankind, on the third-season premiere.”

So make sure to tune in tonight for our Zoo recap between 10 PM – 11 PM ET!  While you wait for our recap make sure to check out all our Zoo news, spoilers, pics, recaps & more, right here!

Zoo begins tonight in Portland, Oregon where Jackson Oz (James Wolk) works to move people through the danger zone away from the hybrids. Jackson presses a button that stops the lions from approaching he asks Samson and Pedro where they ran off to, when hybrids come charging towards them; Jackson instructs the lions to attack and telling the humans to run.

In Ann Arbor, Michigan, Clementine Lewis (Gracie Dzienny) comes to visit Abraham Kenyatta (Noso Anozie) and Dariela Marzan (Alyssa Diaz) and they son, Issac (Jesse Muhoozi). She hasn’t seen them in 7 years and Abraham apologizes that her grandfather took custody of her and didn’t want them to stay in contact with her. She isn’t there to dig up the past, she feels her father, Mitch Morgan (Billy Burke) is still alive but Abraham questions why he wouldn’t have reached out and where would he be hiding for the past 10 years.

Mitch is lying in bed as Jamie Campbell (Kristen Connolly) gets dresses; he is reciting the presidents, explaining he was the loner in class and in order to make friends he would enter the 6th grade talent show – he lost, but he became the kid who knew stuff. Jamie tells him its time and slowly begins to fade away as she tells him it is going to be okay. The next minute, Mitch is lying inside a glass container, unconscious as Jamie’s voice calls to him.

In reality, Jamie is in New York at an upper class function, where she is gathering information from one of her media opponents. She tells him she will give him an exclusive from upcoming book; she records him saying a password on her phone.

Jackson kisses Tessa (Hilary Jardine), telling her to get the people out of there as a new kind of hybrid as big as Rhino chases him. He shouts orders to get the truck ready for one that is very unfriendly; several people with guns close the gate when the humans get inside; Jackson runs into the truck telling everyone not to shoot. He manages to hop into the front of the truck as they lock the hybrid inside. Jackson sends a drone into the air saying he will let the experts and Abraham deal with the new threat.

At Abraham’s, Clementine shows a picture of Mitch inside the tank; they now know he survived the hybrid attack but don’t know who saved him and why. He is being held in an abandoned research lab in Eastern Siberia. Dariela shares that Abe has been researching how to reverse the effects of the gas, trying to separate things in the proteins. He is making great advancements but not any breakthroughs.

Clemetine shows on the map where he is being held and when asked where she got it, Dariela says she stole it from the IADG. Clementine says there is something off about the IADG’s mission and is asking them to help her get to her father before the IADG. Apparently she is too late as the men find the tank Mitch is in. They want to pack him up and move on but they learn they can’t as he is hooked up the tank’s power source, so they will have to remove him from the tank first.

Jamie gets into her car and tells the driver she is not going home. She gets on the private jet, where she places her necklace on the desk and downloads her conversation, chopping up his words creating the sentence, “The last monarch will rise in June.”

The IADG yank out the cables as one of them says he may not survive as Mitch is like a patient on life support. Mitch panics in the water as they work to break the tank; he loses oxygen and falls unconscious when the tank’s glass shatters. They give him oxygen and adrenaline; they are fighting to revive him shouting they cannot lose him. After several shocks to his system, he suddenly wakes up, as he is told everything will be okay.

Jamie rides her motorcycle into Chinatown, she covers herself with a hoodie, she fights one of the guards who is watching the alley, trying to evade the cameras. She uses a code to enter the room, then uses the sentence she created to open a box. When she returns to the plane LAPD surround her and order her to put up her hands where they can see them; she doesn’t answer Abraham’s call.

Abraham is concerned that Jamie is the one who has the plane, Clementine asks if Jackson could help them; but Abraham says their communication has been strictly one way. He says Jackson has a lot of enemies and he cannot expose him.

Dariela comes down with something from Jackson for Abraham and floor plans of the lab Mitch is being held in. She explains how they can get in as Abraham learns there is a new hybrid and tests the sample Jackson sent him. Abraham decides to find someone to watch Isaac and if they don’t hear from Jamie, they will charter a plane. Clementine learns that Dariela and Abraham haven’t told Isaac what they have done as they are trying to give him the best childhood. Clementine is hopeful that Abraham’s research will mean they are not the last generation on earth.

When Dariela is alone in the lab, she calls Jonah (Robert Lawrenson) at the University of Michigan in Ann Arbor. She tells him Abe doesn’t know she is calling but she has some research he needs to see.

The police have a warrant, saying there was a break in at Columbus Park and some property was stolen; she says she was at a party all night. The detective pushes a button telling Jamie he has warned her, ordering her to stop him. She says she is no longer his girlfriend so he can’t tell her what to do and the Shepherds released a gas to sterilize the planet and hybrid animals that killed their friends.
He insists the Shepherds are not a threat, but Jamie insists there is still one out there: The Falcon. They are planning something big, something far worse than they’ve ever seen. She asks him if he is going to arrest her if she is going to go after the Falcon. He reminds her that he has always cared about her but he isn’t going to sit back and watch her fall into the darkness. He takes what she has stolen and tells her it is over saying she can tell the NYPD whatever she wants but if he catches her again, he is bringing her in.

Mitch has been checked over physically by the IADG, he is interviewed but has no idea what year it is or how he got there. Mitch isn’t speaking or communicating; when the agent is about to leave the room, Mitch starts banging his right hand on the table implying he knows his name.

Jackson visits the shelter, playing a bit with the punching bag when one of the younger boys he rescued asks him about the thing he uses to control the lions. He says its part radio and part computer that his scientist friends made for him; suggesting he might let the boy try it later on.

IADG analyst arrives to take the hybrid, the armed men let her in as Mitch continues the interview. He realizes its been 10 years since he was last seen, they ask him to trust them. Mitch asks for his pen, he struggles to write something but the agent has no idea what it means. Mitch shows him what he wrote and as he does that, the agents watching over say it is not working.

Jamie’s phone rings again, and its Clementine from Abe’s phone. She tells Jamie that whatever happened between Jamie and Abe doesn’t matter and reveals that Mitch is alive and they both need Jamie; Jamie is in denial but Clementine insists she has proof but Jamie says she won’t do this again after years of searching. Clementine asks if she really wants to risk not being there when they find him. Jamie picks up Mitch’s broken glasses and tells Clementine she is on her way.
The IADG agent crouches behind the truck and apologizes to the hybrid as she places something under the truck. Abraham asks Clementine why she is sneaking off without them, she says they have Isaac and he needs them more than she does; when Abe protests she pulls out a gun telling him this isn’t up for discussion. Abe is shocked saying the little girl he knew would never pull a gun on him and she tells him that people change. She races off in the truck.

The agents are showing Mitch symbols, hoping he can make something of them. He quickly puts them in order. One of the agents say he isn’t ready while the leader says he is ready. Mitch is told there is someone there who has been waiting to talk to him.

Dariela is surprised Abe let Clementine go, and when they return to their own lab the blood sample Jackson sent Abe is growing but they don’t know what it will be. Meanwhile, Jackson and Tessa are finally taking a break. At the NYPD, the detective gives an officer the drive asking her to find out what is on it as soon as possible.

Tessa and Jackson are surprised to see the IADG agent has arrived already and was trying to leave. Jackson seems to know her, but in a matter of seconds the place explodes and people are screaming.

Clementine enters the plane, telling Jamie that Abe and Dariela will join them later, lying that Isaac got sick. Jamie says Clementine looks different, but she brushes it off to a decade of not seeing each other; they hug and are told wheels up in five. Clementine gets a message saying the FBI are back and what did she do; she quickly erases the message.

A woman approaches Mitch who is sure he has questions just like she did. She touches his shoulder telling him they are together again and her will be okay. He recognizes her as his daughter and even says her name; which means the girl with Jamie is NOT.