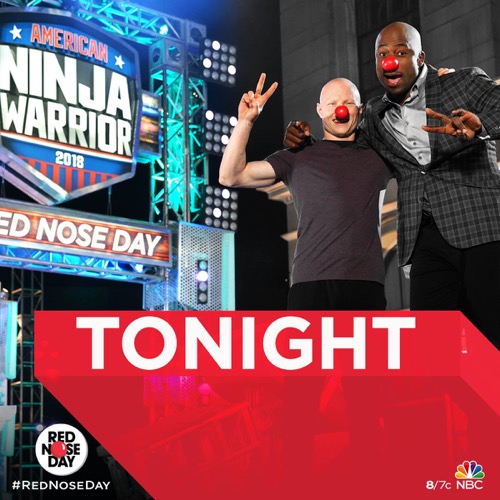 Tonight on NBC their obstacle course competition American Ninja Warrior returns with an all-new Thursday, May 24, 2018, special episode and we have your American Ninja Warrior recap below! On tonight’s “Red Nose Day: Celebrity Ninja Warrior,” special episode as per the NBC synopsis, “Nine celebrities take on the course in the name of charity. Elite ninja advisers serve as both coach and cheerleader, helping them prepare mentally and physically for their run. The celebrities include Stephen Amell, Erika Christensen, Jeff Dye, Ashton Eaton, Nikki Glaser, Derek Hough, Natalie Morales, Nick Swisher, and Mena Suvari.”

In honor of Red Nose Day, a handful of celebrities are set to take part are in the obstacles. Kristine Leahy announces that each celebrity will go through 6 obstacles. Each obstacle will raise 5k for charity.

WWE Superstar Nikki Bella is up first with Gram McCartney. They make it through the first obstacle. On to the second, she almost loses her footing but makes it. Nikki gets through the third obstacle with Gram ahead of her cheering her on. The crowd chants for her as she begins obstacle four. She loses her grip and falls into the pool.

During the commercial, Greg Sulkin made it through three obstacles, raising $15k.

Derek Hough is up next. He makes it through the first obstacle. Ne-Yo cheers for him on the sidelines. Derek makes it through the second challenge, the grab bag. On to the third and fourth obstacle very quickly, Derek has made $20 k so far. Now for the fifth obstacle, he doesn’t make it as he loses his grip and falls into the pool. He announces he will donate $10k of his own money.

During the commercial break, Colton Dunn from Superstore went through the obstacle course. He attempted the first 3 obstacles but fell into the pool each time. On his behalf, Comcast donated to Red Nose Day.