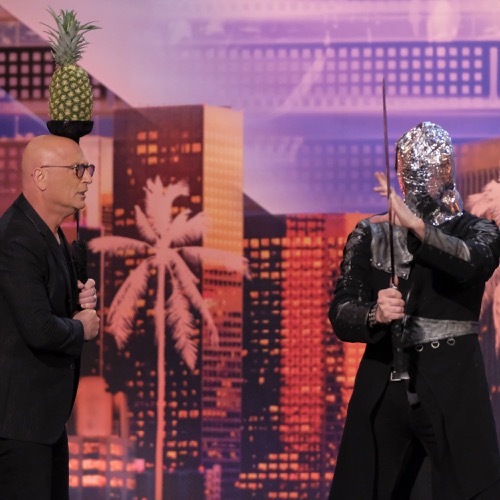 First up tonight is Yumbo Dump, two men that you think are sumo wrestlers but they remove their shirts and make sounds with their stomachs. The sound of a drop of water falling on water, Mel hits her buzzer and the audience boos. Then they do pulling a cork out of a bottle of scotch malt whiskey, cries of dolphins and UFOs flying. Howie says he is going to go home and try it, he loved it. Heidi thinks they make people laugh. Simon said it was stupid but really funny. Mel thinks she was watching a completely different show. Simon, Heidi, and Howie say yes. Mel says no.

Shawn and Lindsay are a stand-up comedy duo/couple. They made jokes about themselves and fell flat. Simon said it was awkward and all the judges said a resounding NO.

Carissa and Michael are a couple and they sing their vows that they wrote for their wedding. Heidi is standing up, the crowd gives a standing ovation. Heidi says she loved and thinks they have a hit. Howie says they are adorable, he didn’t like the song, found it too the coffee house. Mel B thinks it needed a little something extra. Simon liked it, he liked that it was an original. Heidi says yes, Simon says yes, Howie says no, Mel B says yes. They get three yes votes and go to the next round.

Lilly Walker lives on a farm with many different animals and says if she wins she will donate the money to animal hospitals and shelters. Lilly recreates animal sounds; she did a horse, dolphin, turkey, rooster, duck and a dog for Simon who barked along with her. Howie loved it and says he loves her. Mel B says well done. Heidi says her favorite was the horse. Simon thinks America will fall in love with her but tells her she needs to step it up. Lilly got four yes votes from the judges.

Brothers Ricardo and Alejandro (Fratelli Rossi) do a tumbling act. One of the brothers had a recent injury and he insisted on performing anyway. The act is ridiculously amazing and even after a mistake and fall, they go back at it. Heidi thinks they are absolutely incredible. Mel B found it terrifying but hot. Howie says there were a couple of mistakes, but wow. Simon says they can’t be judged on being technically perfect because they went back at it and did it again. They get four yes votes and are moving on.

Christina Wells is 42 when she was 19 she wanted to sing in a competition and she was cut because she wasn’t the right size. Today she is auditioning to show her sons that everyone can achieve their dreams. The crowd is standing and so are the judges. Howie said she blew the cork off, they felt her energy and her soul. Mel B says she is beautiful. Heidi wishes she could do half of what she did. Simon says that he works with so many stupid people who think that people can’t sell a song because of their weight, but they are wrong. Christina gets four votes from the judges.

All the way from the Dominican Republic is the dance group Da Republik – Mel B loves all the girls’ hairstyles. They do an act of tumbling, jazz, hip-hop, and tricks. The crowd loved it and so did the judges, everyone is standing. Mel B loved the music, the energy, and the choreography. Howie says it is brilliance in dance. Heidi felt like it was a different kind of passion. Simon says that in about two minutes they did everything he had to and he loved it. The group gets four yes votes and are moving to the next round.

Aaron Crow slices an apple with a sword, then he picks two people from the audience to join him on stage along with Howie. Aaron asks one person to hold a board, the other holds a bag of rice and Howie has the pineapple on his head. Then Aaron puts hot wax on his closed eyes, bandages, duct tape, and foil then he slices through the rice bag, the board and Howie’s pineapple. Mel B loved it, she says he was hot. Heidi can’t believe he put the hot wax on his eyes, she thought it was incredible. Howie says his brain is saying no but as a judge, the answer is yes. Four yes votes from the judges.

Alex Hooper is dressed in a red shiny bodysuit and blue silky tights and a blue tail. He says he is there to inspire the world with happiness and comedy. Alex takes shots at the judges, the joke falls flat. Howie gives him an X. Mel B gives him an X. Heidi gives him an X. Simon liked his joke, Alex calls the crowd peasants. Mel B gets up and hits Simon’s buzzer. Three No votes, Simon thought he was funny and Mel B tells him to get off the stage.

Mochi is next, he is from Japan and wants to perform all over the world. He uses his hands with an LED screen behind him to make these dazzling designs. Everyone is standing up. Howie thought he had seen absolutely everything, but clearly not. Mel B said it was current and is trending now with kids. Heidi said it was fun and brilliant. Simon thinks he has a great personality and is so much fun. All four judges give Mochi a yes vote, he is going through.

Celina is 66, her husband Filiberto is 70 and they are from Cuba and they are living their dream tonight of performing on stage. The dance performance was shocking, they twerked and ground, it was embarrassing. Mel B said that some things should be done in the privacy of their home. Heidi prays that she can find someone to do that with at that age. Simon says it was probably just awkward for their daughter, but he liked it. Mel B reminds Simon that it was a family show. Howie loved and gives a yes. Mel B says no. Simon says yes and so does Heidi. They are advancing to the next round, Mel B says that she doesn’t want to see that again.

Michael Ketterer is the final act, he is a father of six children, most of the adopted. Michael is a singer, he sings “To Love Somebody.” Everyone is standing and cheering. Mel B said it was incredible and thanks him for gracing the stage. Heidi thinks he has a great voice and says she was blown away. Howie says he just wants to be a fraction of the human being that he is. Simon says that sometimes it’s about real and a surprise, he was concerned because Michael was so nervous. Simon gets up and hits the golden buzzer. Simon goes on stage to shake Michael’s wife’s hands and to greet all the children and hug Michael. Simon tells Michael that his voice is special and very perfect.